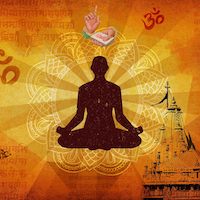 Earlier this month, a faceless organization announced a global virtual conference (to be held Sep. 10-12) synonymous with its self-professed agenda: ‘Dismantling Global Hindutva’ (DGH). When I read what they’re all about and what this conference intended to do, I wasn’t shocked, to say the least. Their exact words will make you giggle, if not laugh: 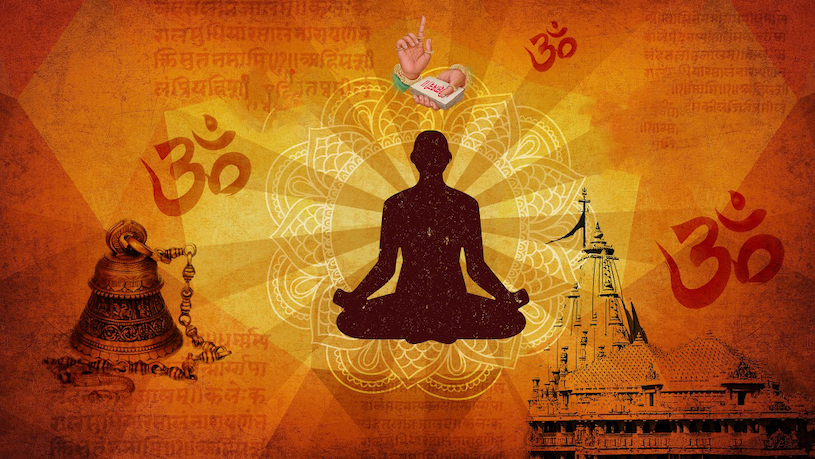 This rise of militant Hindu groups in India and the corresponding escalation of violence against religious minorities and other marginalized communities are well documented, including by global media.

The interesting part is breaking this dense narrative down.

‘Rise of militant Hindu groups’ – if one exists at all? Some politically and ideologically charged non-rightist groups often label one of India’s oldest nationalist organizations, Rashtriya Swayamsevak Sangh (RSS), as a militant group. Point of fact: It is not. There are innumerable instances of cases where RSS has contributed to humanitarian aid; etc. (Comparatively, here in the USA, the Hindu American Foundation (HAF) assertively advocates for Hindu American rights.) Furthermore, non-rightist groups have taken to describing assertive Hindus (Hindus who are striving to protect their faith from being insinuated against and maligned) as ‘Bhakts’/’Sanghis’.

In India, where Hindus are a majority, they constantly get beaten up. Their temples are broken; their idols are stolen. And, they are always made to feel guilty for now-out-of-practice systems like sati; caste; untouchability; etc. Similarly, in the USA, Hindu-Americans – which form a significant percentage of the country’s minority population – are constantly subjected to hate crimes. In fact, such crimes have been on the rise over the past few years. A 2014 poll conducted by the Pew Research Group entitled ‘How Americans Feel About Religious Groups’ showed that Hindu Americans are not treated as warmly as Jews and Catholics are. Hindus here were given an average rating of 50 on a scale of 100, and an even lower score when ranked by Evangelical Christians. Furthermore, another report stated that at least 3 out of 5 Hindu-American students faced bullying on the grounds of their beliefs.

The Hindu reported 5 to 6 instances of hate crimes against Indian Americans, especially Hindus, in the USA in the year 2017 alone. Furthermore, the FBI’s Hate Crimes report detailed 12 documented instances and 14 transgressions against Hindus in the United States (as of its release). This is up from 11 instances in 2017 and 10 incidents in 2016, marking the third year in a row that Hindu Americans have been the subject of escalating violence. Nevertheless, these 14 instances were out of 7,175 reported hate crime events (of all types) in 2018 (down from 7,175 in 2017).

I wonder if the so-called scholars, activists, and journalists involved in this conference have even the slightest idea that the entire agenda reeks of Hinduphobia. A more apt a term for that would be ‘Hindumisia’ (Greek: misia – hatred). This is nothing less than an imbecile attempt at a smear campaign against one of the oldest civilizations and civilizational states of the world. 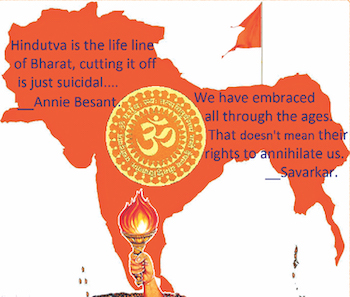 What leads to such an outrageous amount of hatred towards Hindus (and towards Hinduism in America) in the first place? Primarily, the West became intimately acquainted with the religions of the Americas, Africa, and Asia through their own Western prism – so much so that the insider view completely disappeared from their narrative. Professor Arvind Sharma, who teaches comparative religion at McGill University, calls this mode of diffusion of information about native religions of the colonies from a colonial perspective as an ‘outsider-to-outsider’ method of information sharing.

Another academic researcher, Rajiv Malhotra, who is from India, coined the term ‘atrocity literature.’ Atrocity literature, according to Malhotra, is a ‘technical phrase referring to research studies developed by Western perspective with the specific objective of demonstrating that [a] target[ed] non-Western culture is committing atrocities [against] its own people, and hence [that the situation] requires Western intervention.’

It is also interesting to observe how erroneously American textbooks depict Hindus and Hinduism. Let’s narrow our focus down to the cases of Virginia, California, and Texas. In the early 2000s, Hindu Americans banded together to protest the portrayal of their culture in school textbooks. Because of California’s vast population, state-approved textbooks are frequently used in other states, which suggests that modifications to California textbooks have a far wider impact. For example, an Indian Muslim was misinterpreted as a Brahman priest in a photo caption. Elsewhere, ‘Where’s the Beef?’ was a derogatory title used in a segment on Hindu vegetarian ideals. Other passages mocked major individuals from Hindu mythology. It was uncontroversial to address these issues. The Vedic Foundation (VF) and the Hindu Education Foundation (HEF), the Hindu organisations that advocated the amendments, disagreed. The California Board of Education (CBE) was also asked to eliminate or alter other key portions of various passages.

‘Brahmanism,’ for instance, is a term coined by European Indologists in the 19th and early 20th centuries to characterize and define Hinduism as a religion founded by the Brahmin priestly class. While many religious scholars by the mid-1980s considered use of the term to be a type of neo-colonialism, some people still use the word and its variations. Several academics persistently use the phrase without scrutiny – thus supporting a racist, anti-Semitic, Eurocentric construction of Hinduism and Hindus while simultaneously denigrating Hindus’ own understandings of their own history, philosophy, and customs. For instance, consider the English word ‘Hinduism.’ Let’s closely inspect the meaning of its beautiful Sanskrit counterpart, ‘Hindutva’. The suffix ‘-tva’ in ‘Hindutva’ refers to ‘essence’. Thus, this indigenous term carries a significant (and lovely) meaning: ‘the essence of being a Hindu’.

In addition to ‘Brahmanism’, another concept widely used by leftists and liberals in India and abroad is that of the ‘model minority’. Sociologist William Petersen coined this term in a 1966 article titled ‘Success Story: Japanese-American Style’. He went on to frequently use the term in reference to Asians. 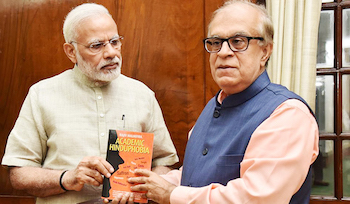 Contextually, within various social, political, and educational circles, practicing Hindus in India and abroad must have faced the brunt of this pressure to conform (even if they hadn’t put a label on it). In many ways, the model minority concept can be Hinduphobic and divisive – emphasizing incorporation into the mainstream culture while simultaneously dumbing down significant multicultural distinctions within the community itself. Moreover, by stressing their overall achievements, the term is also frequently applied to minimize the hardships that the Hindu minority population experiences. Numerous Hindus are negatively affected by the model minority stereotype, as they are made to feel as if they are under an obligation to live up to often unrealistically high stereotypes associated with the phrase. In the same light, the concept proposes a simplistically causal explanation for their successes rather than taking into account other variables like aptitude, competence, or perseverance. It also divides and hurts minorities by pitting them against one another.

There has also been some useful scholarship, journalism, and community-based activism on the links between Hindutva and racism and caste-ism.

And what about the links between Hindumisia and racism? Imagine if a secretly pro-Hindu scholar and speaker had deviously infiltrated the conference and – at just the right moment – started talking in a plainspoken way about the need for community-based Hindu activism to counter racial, religious, and ethnic hatred against Hindus. Among such a hostile audience, just imagine the apoplectic, outraged uproar that simply mentioning the words ‘Hindu activism’ might have provoked!

Why is it that when Hindus happen to be the ones to speak of the need for activism, the response is to bring ‘Tukde Tukde Gang’ and ‘Azadi’ sloganeers (and not Hindutvadis, mind you! I wonder why?) to the forefront of the discussion?

Another example – and in this case, I’ll go ahead and quote one of the statements made during the conference itself by one of the speakers, Akansha Mehta (who presents a hostile definition of what constitutes Hindutva):

I emphasize, without hesitation, that Hindutva is inseparable [from] Hinduism. And arguments that Hindutva is not Hinduism are deeply dangerous … and will not lead us to the future we want!

To this, one might respond that just as light is dangerous to the dark, Hinduism’s core virtues are dangerous to lies – because in the end, truth will overcome falsehood and emerge victorious. We want that future!

Things became interesting when the DGH conference, on the one hand, claimed that

while on the other hand, discussing (as something to look out for) that

So which is it?

This is a classic case of Hindumisia.

Another aspect of note is that their narrative was filled with unadulterated hatred. 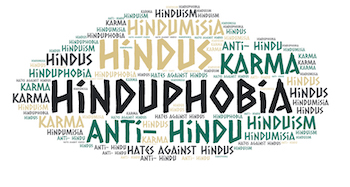 Members of minority populations face bigotry; racial inequality; and economic, political, and (as the conference itself illustrates) even academic discrimination. For instance, consider how some so-called ‘intellectuals’ use ‘Savarna’ as a racist, caste-ist slur against Hindus. Xenophobic, anti-Semitic, and Eurocentric assumptions about Hinduism and Hindus lie at the basis of this peculiar use of ‘Savarna’ as an epithet. ‘Savarna’ was originally a term used for someone from the same group (i.e., one of the four varnas mentioned in the Hindu dharma). But egregiously misrepresenting the dharma – and misusing their positions of power – ideologically rigid, racially biased haters pretend that Hindu philosophies have influenced (and have religiously authorized) culturally ingrained biases based on a rigid, totalitarian, pan-Indian power pyramid.

But not only that, propagators of Hindumisia brazenly have the gall to not only blatantly misrepresent Hinduism but then go on to claim that Hindus themselves are responsible for the inequality and discrimination being perpetrated against them! 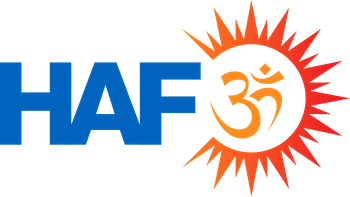 Moreover, lest we think that such appalling Hindumisia is limited only to those Western universities that backed this conference, feel free to draw parallels with the hostile climate within India’s own Jawaharlal Nehru University (JNU). (Activist parents of college-aged children, take note!) Consider the case of Abhinav Prakash, Youth Wing National President of the Bharatiya Janta Party (BJP). His 2017 interview as will prove pivotal in this milieu. Abhinav, himself a Dalit and an ex-JNU student, recalled his campus experiences:

Being at the heart of the citadel of the left-wing in JNU, I was also a witness to the decadence of left-wing politics, its shallowness and sheer intellectual bankruptcy, which revolved around caste and regional hegemony under the garb of ‘progressivism’. Their anarchist view of the society, hostility towards India, and almost genocidal hatred towards Hinduism left me with no choice but to search for an alternative political force in the campus. And ABVP is the only right-wing party – in fact, the only true opposition – in the campus.

Here’s an excerpt from when Abhinav was asked about how his caste identity shaped his thoughts and politics:

The Dalit discourse was, and continues to be, heavily dominated by non-Dalits who define the popular perception of our collective aspirations. So, it’s the ivory tower [of] left-wing academia – or [of] demagogues like Kancha Ilaiah or the likes of Arundhati Roy who have a defining word on what it means to be a Dalit or [on what] Dalits want! The reason [this] is so is not because Dalits cannot represent themselves. But [it is] about those who control the institutions and [the] public sphere.

In other words, it’s about those who control the conversation. So how do we change the conversation? How do we counter their hatred-filled narrative? There’s only one answer: by embracing Hindutva.

And by that, I mean being a virtuous Hindu. A nobly assertive Hindu; a protectively courageous Hindu. A modern Hindu who wouldn’t tolerate misinformation being spread about his/her faith. As a Hindu, one should at least be aware of what our sacred texts preach, so that these activists cannot and dare not spread hate and deception about Hindu dharma.

There’s this saying from the Mahabharata. In Sanskrit, it reads, ‘Dharmo rakshati rakshitaha.’ It means: Protect your dharma – and you will be protected. 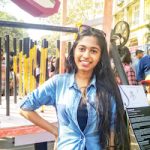 India’s one of the oldest nationalist organizations