Over 250 South Asians and Indo-Caribbeans came together in South Florida for this memorable event, the first in the community to include members from differing faiths and nations under one roof. Hosted by Desh Videsh Media Group, the awardees included community members from India, Pakistan, Trinidad, and the United States.

Founded by Raj and Aruna Shah in 1993, Desh Videsh Media Group has been a staunch supporter of community activities and cultural enrichment from the beginning. Desh Videsh Media Group’s governing principle is to focus on the positive achievements of the South Asian and Indo-Caribbean communities living in the United States. The Community Leaders Awards Banquet was an opportunity to honor individuals who embody those same principles as well as to “recognize the many active participants in our community who help bring spiritual and cultural guidance to our youth locally and in our native countries,” said Mr. Shah. 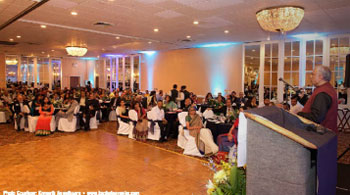 The inaugural Community Leader Awards Banquet, held at the Sawgrass Inn & Conference Center in Plantation, Florida, began with four prayers (Hindu, Muslim, Sikh, and Catholic) chanted by South Asian and Indo-Caribbean youth. Mr. Shah, who is also the Managing Editor of Desh-Videsh magazine, welcomed the audience with a touching speech, while Fareida Rajkumar, emcee, announced each awardee and kept the program moving along smoothly. Mrs. Shah, also the publisher of Desh-Videsh magazine, congratulated each awardee and presented the individuals with an award plaque.

During the program, 15 community members in seven different categories were honored: Philanthropy; Religious; Arts and Culture; Education; Women’s Empowerment; International Social Services; and Local Community Services. “The evening brought together so many different people who give of themselves in so many different ways. I was among some very distinguished and accomplished members of our community and was truly humbled by the recognition,” shared awardee Smeeta Patel.

Short Bios of All awardees
Shekar Reddy, (Philanthropy)
Shekar Reddy is a successful business owner with 28 years of experience and actively supports local communities. Shekar and his wife, Shylaja, are avid followers of Hinduism, and both volunteer at the Shiva Vishnu Temple and support other Hindu organizations and community events, along with their two children, Rohith and Shruthi.

Dr. Ramanuja Iyengar (Religion)
Dr. Ramanuja Iyengar has practiced cardiology for more than 25 years, and he and his wife, Revati, donate much of their finances to community projects. He is currently heading the construction effort for a traditional Shiva Vishnu Temple of South Florida, and also assisted with the total renovation of a Lakshimi Narasimha temple in his hometown.

Neil Persad (Religion)
Neil Persad is the president of Diwali Nagar Inc., a spiritual leader at the Amar Jyoti Mandir in Miami and is well-known as the leader of the Florida Melody Makers International. Neil is committed to building and developing the minds of children for the upliftment of the Indian community.

Bharti Chokshi (Arts and Culture)
For 38 years, Bharti Chokshi has learned and taught Indian classical music. She is the Executive President of the Association of Performing Arts of India, working diligently to arrange concerts, classes, and workshops. In addition to music, Bharti has worked in mental health care for years, and is blessed with two sons and two grandchildren.

Revathi Iyengar (Arts and Culture)
Revathi Iyengar trained in Indian music at a young age, leading to her involvement in the India Fine Arts Society and “Composers Day” in South Florida. She was also involved in her sons’ schools, encouraging awareness of India and Hinduism. She is currently involved with the Shiva Vishnu Temple of South Florida’s “Elders Forum”.

Dr. Durgesh Thaker (Arts and Culture)
Dr. Durgesh Thaker joined IRCC  after moving to the US and began working to put together cultural events and festivals for the Indian community. Along with his wife, Anju, and two sons Niraj and Nishant, Dr. Thaker is highly involved in the community and is motivated by the legacy he will leave behind.

Smeeta Patel (Youth Education)
After moving to the US from Zambia, Smeeta Patel became active in the local Ankur Gujarati Samaj, and also began working for an accounting firm. Smeeta and her husband ventured into the sports business in 1991, and Smeeta became highly involved in the temple, develop the BalaVihar the program to its current successful status.

Manju Kalidindi (Women Empowerment)
Manju Kalidindi is an attorney who is deeply involved in community charities. Manju has been recognized by the Supreme Court of Florida for pro bono service, and as the president of Sahara of South Florida, Manju helps abused South Asian women create a safer future. Her work has also benefitted victims under the Violence Against Women Act.

Michele Renee (International Social Services)
Michele Renee Zerda, licensed cosmetologist, is passionate about outer and inner beauty. She works with high-profile clients, and is grateful for the opportunity to work with the Indian community. She is a supporter of “My Hope Chest”, and also works with Metropolitan Ministries and Chaitanya Educational and Rural Development Society, to provide wells for villages in Andhra Pradesh.

Virginia A. Vaidhyanathan (International Social Services)
Virginia Vaidhyanathan started the India-United States Transplant Foundation in 2005, and is currently their treasurer. Virginia also worked a news announcer and also taught in the New York public school system for several years. Virginia was a founding member of the India Association of Western New York and the Hindu Cultural Society of Buffalo.

Dr. Piyush C. Agrawal (Local Community services)
Dr. Piyush Agrawal is an education professional and community service activist. He has served as the leader of many Indian associations and has made contributions to his home village for a girls college. In 2003, Dr. Agrawal asked President Bush to start hosting Diwali festival at The White House, and it has been celebrated every year since.

Shahid Barry (Local Community services)
Shahid Barry earned his Bachelors of Commerce degree from St. Patrick’s College in Karachi, has received many company sales and achievement awards, and uses his business as a means to help community members achieve their goals. Shahid has been married to his wife Karen for 32 years, and is blessed with a daughter, Roxie.

Syed S Jafri (Local Community services)
Syed Jafri grew up in Lahore and has been working in South Florida with many local organizations to promote cultural activities, and is also associated with the Anand Sangeet Orchestra, which performs at a variety of functions. Syed is motivated by his family of high achievers to fulfill his desire to do things with greatness.

Prèét Sahí (Local Community services)
South Florida’s Indian community knows Preet Sahi as the Anchor and Chief Correspondent for the television channel: TV Asia. She handles some of the network’s high profile projects, and has worked with many local organizations. Mrs. Sahi also owns several assisted living facilities and is charge of the Fort Lauderdale Chapter for the Spiritual Organization: Sant Nirankari Mission.

Post Views: 1,627
Top Spas & Resorts in the Southeast US
Diwali Festival of Light