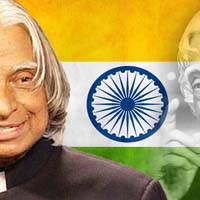 1. Distributed newspapers during childhood, after school hours, in order to help his cousin Shamsuddin.

2. Picked up tamarind seeds and sold them at grocery shops daily, at the time of WWII, to earn one anna per day as his pocket money.

3. Was an average student in school.

4. Converted a cattle shed into a laboratory to work on sounding rockets.

5. Carried India’s first indigenously developed rocket on bicycle from the laboratory to the launchpad on bicycle, accompanied by R. Aravamudan.

6. Read both the Quran and the Gita.

7. Soon after becoming the President of India, he donated all his life’s savings and salary to his NGO, ‘PURA’ (Providing Urban Amenities to Rural Areas), as advised by Dr. Verghese Kurian. Kalam had once called Dr. Kurian asking him what he should do with his money as Government of India will take care of him lifelong.

8. Hand-wrote his own ‘Thank You’ cards with a personalized message on each of them.

9. Was invited by the then PM, A.B Vajpayee, to join his cabinet as a minister. Kalam declined the offer politely.

10. Masterminded the Pokhran nuclear test. The rest is history…

11. Instead of organizing the government Iftar party, he distributed different commodities to 28 orphanages, with the sanctioned money.

12. Wanted to become a pilot. Couldn’t. Became a rocket scientist.

13. Addressed a gathering of about 400 students once, even after electricity went off.

14. Had a medical invention to his name – a coronary stent built with missile composites that dramatically brought down the cost of heart stents from Rs 55,000 to Rs 10,000 in the mid-1990s.

15. While serving at ISRO, he used to face the press whenever a launch failed, accepting it as his own mistake. But one huge success and he is nowhere to be seen. He sent his fellow scientists to talk to the press.

17. While at DRDO, he ordered not to put broken glass on the walls, as it’d be problematic for birds to perch on them.

19. Refused to sit on a specially designed chair for him at the convocation of BHU, Varanasi. Instead offered the chair to an University official.

20. During his tenure as a President, his family visited the Rashtrapati Bhavan only once. They came in a sleeper coach in a train from Madurai. After they left, Kalam asked the Chief Accounts Officer to prepare the bill for his family’s visit to Rashtrapati Bhavan and paid it.

21. Entered the Rashtrapati Bhavan with one suitcase, and left with just one more.

23. Switzerland celebrates ‘Science Day’ on May 26th each year to mark his visit to the country on that day.

24. Was a vegetarian throughout his life.

25 Ordered the ITBP to fit heaters in the cabins of its guards at the Indo-Tibetan border, and provide them with adequate warm clothing.

27. Took great care of his colleagues. A co-worker of him had promised his kids that he would take them to the local carnival after returning from work, the co-worker had also obtained the prior permission of Mr. Kalam to leave early. The colleague was so engrossed in his work that it was well into the evening when he realised that he had made a promise to his kids. On rushing back home, he came to know through his wife that Mr. Kalam had come earlier and taken his kids to the carnival.

28. Usually preferred two south-Indian dishes for his main meals. If there was a third dish prepared for him, he would ask whether there was any festival.

29. Wrote 17 books and documentaries throughout his lifespan.

30. Last, but not the least, was a tech-savvy person. Started a net-based initiative named ‘Billionbeats.’ Tweeted about almost every public activity he was involved in, even about his journey to Shillong (where he breathed his last).

The Poetry of A.P.J. Abdul Kalam
A Tribute to Dr. APJ Abdul Kalam in Quotes