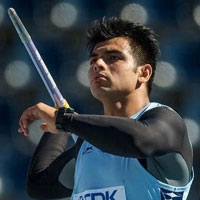 Javelin thrower Neeraj Chopra created history by becoming the first Indian athlete to become a world champion at any level when he won a gold medal at the U-20 World Championships in Poland.

Chopra created a new U-20 world record by throwing the javelin a distance of 86.48m.