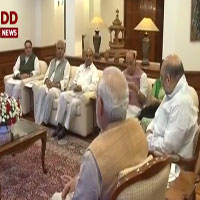 The decision was taken after a the board met today at Prime Minister Narendra Modi’s residence in the national capital.

Gujarat Chief Minister Anandiben Patel on Monday offered to resign as she is soon turning 75 and asked the BJP to select a new face for the post, speculation has gone rife as to who could replace her.

I&B minister Venkaiah Naidu also said the state legislature will meet in gujarat to decide on the next cm candidate for the state under the guidance of Amit Shah.