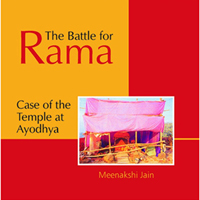 Book Review – The Battle for Rama: Case of the Temple at Ayodhya By Meenakshi Jain 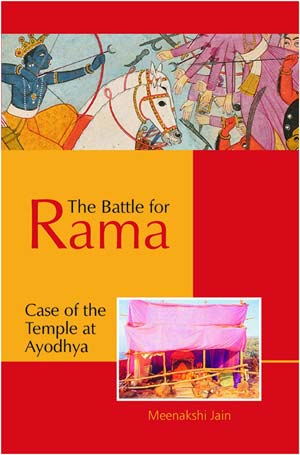 For over a decade, a handful of Left historians have strenuously endeavoured to stymie the Ramjanmabhumi movement. From questioning the antiquity of Rama worship and the identity of ancient Ayodhya, they have also challenged the widely held belief Babri Masjid was built on the site of the Janmabhumi temple.

Scholars have, however, traced the antiquity of the Rama Katha as far back as sixth-fifth century BCE, when ancient ballads (akhyanas) transmitted Rama’s story orally. Valmiki’s Ramayana itself has been dated to the fourth-third century BCE. Over the centuries, Rama’s story has been re-told in many vernaculars of the country. Rama is the exemplar of moral values for Hindu society and epitomises its aspirations of artha, kam, and above all, dharma.

The proceedings of the Allahabad High Court have exposed the vulnerabilities of Left historians. They could proffer no evidence of continued Muslim presence at Babri Masjit, while the unwavering commitment of Hindu devotees to the site had been attested by several sources. Babri Masjid was not mentioned in the revenue records of the Nawabi and British periods, nor was any Waqf ever created for its upkeep. No Muslim filed an FIR or complained of dispossession or obstruction in his alleged use of the Masjid when the image of Sri Rama was placed under the central dome on 23rd December 1949. The Sunni Central Waqf Board entered litigation on 18th December 1961, just five days before the twelfth anniversary of the placement of the image in the Masjid, on which date any claim would have become time-barred. The Board did not file a suit for possession, instead it sought a declaration on the status of the property.

Here is an excerpt from the book where Mrs. Jain is quoting works of some Muslim scholars:

And among them is the great mosque that was built by the Timurid king Babar in the sacred city of Ajodhya. It is believed that Rama Chandra considered to be the manifestation of God, was born here. There is a long story about his wife Sita. There was a big temple for them in this city. At a certain place Sita used to sit and cook food for her consort. Well, the said king Babar demolished it and built a mosque at that very place with chiseled stone in 923 AH (Narain 1993: 16-17).

Another work was the Hadiqah-i Shuhada, (Lucknow 1856), by Mirza Jan, a participant in the jihad of Amir Ali at Hanuman Garhi in 1855. Mirza Jan referred to a Persian text, Sahifah-I Chihal Nasaih-I Bahadurshahi (the Bahadurshahi Book of Forty Sermons), attributed to a granddaughter of Emperor Aurangzeb. He claimed to have found a copy of the book, made on 11th July 1816, in the library of the grandson of Prince Dara Shukoh. Among its sermons, the book advised devout Muslim rulers to keep idolaters in subjection to Islam and,

keep in constant use for Friday and congregational prayer the mosques built up to strengthen Islam after demolishing the temples of the idolatrous Hindus situated at Mathura, Banaras, and Awadh, etc., which the wretched infidels have, according to their faith, adjudged to be the birthplace of Krishna in one case, Sita ki Rasoi in another, and Hanuman’s abode in a third …

The authenticity and authorship of this work is debatable (Kunal 2016: 253-57). Mirza Jan did not name the daughter of Bahadur Shah, nor cite the year in which she composed this work. However, according to the Foreign Department Political Consultations, December 28, 1855, No. 450, the Prime Minister of Nawab Wajid Ali Shah of Awadh “referred to a book which existed in the King’s library written in the reign of Bahadurshah about the year AD 1707 which contained an account of the Masjid at Hanumangarhi.” While quoting from the above text, Mirza Jan remarked,

In short, these four mosques (Babri mosque, Ram Darbar mosque, Fort mosque, and Hanumanagadhi mosque) built by the rulers of the past were situated at Ayodhya like four pillars of the faith (Narain 1993: 23-26). In his Hadiqah-i Shuhada, Mirza Jan wrote,…they (Muslim rulers) cleared up Faizabad and Awadh also from the filth of false belief, inasmuch as it is a great place of worship and was the capital of Rama’s father. Here they broke the temples and left no stone-hearted idol intact. Where there was a big temple, there they got a big mosque constructed, and, where there was a small pavilion, there they erected a plain camp mosque/enclosure. Accordingly, what a majestic mosque Babar Shah has got constructed in 923 AH under the patronage of Sayyid Musa Ashiqan! Its date is “Khayr Baqi.” It is still known far and wide as the Sita ki Rasoi mosque (Narain 1993: 35-36).

Several other works in Urdu written in the nineteenth and early twentieth century also referred to the replacement of the temple by the mosque. The Tarikh-i Awadh (1919), for instance, stated,

Babur got the mosque built after demolishing the Janmasthan and used in his mosque the stone of the same Janmasthan, which was richly engraved, precious kasauti stone, and which survives even today.

The Qaysar-u’t Tawarikh located the mosque in Sita ki Rasoi as well as the Janmasthan. It acknowledged, “…all the temples of Ayodhya were turned into mosques by the Sultans of the past” (Narain 1993: 27-35).

The Fasanah-I Ibrat, written by Rajab Ali Beg Surur in 1860, but first published in 1884, stated,

…a glorious mosque was built up during King Babar’s regime on the spot where Sita ki Rasoi tomb (?) is situated in Awadh. During this Babari (dispensation) the Hindus had no guts to be a match for the Muslims. (The mosque) was built in 923 AH under the patronage of Sayyid Mir Ashiqan … There (on Hanumangadhi) Aurangzib constructed a mosque …The Bairagis effaced the mosque and erected a temple in its place. Then they intruded into the ‘Masjid-I Babari’ where the Sita ki Rasoi was situated (Narain 1993: 30).

Muraqqah-i Khusrawi, or the Tawarikh-i Awadh, by Shaykh Azamat Ali Kakorawi Nami (1811-1893), an eye witness to several events of the reign of Nawab Wajid Ali Shah, was completed in 1869 but published in 1986. The manuscript is preserved at the Tagore Library, University of Lucknow. The parts dealing with the construction of Babri Masjid and the Hindu-Muslim conflict of 1855 were deleted by the Fakhruddin Ahmad Memorial Committee, under whose auspices the book was published. Zakir Kakaurwi published these sections separately under the title Amir Ali Shahid Aur Marakhai-i-Hanuman Garhi in 1987 (Grover and Gupta 1991: 152). It stated,

According to old records, it has been a religious rule with Muslim rulers, after the triumph of Sayyid Salar Masud Ghazi, to build mosques, monasteries, and inns, spread Islam, and put a stop to blasphemous practices (bid at), wherever they found manifestation (of infidelity). Accordingly, even as they cleared up Mathura, Bindraban, etc. from the rubbish of non-Islamic practices, the magnificent Babari mosque (masjid-I sarbaland-i Babari) came up in 923 AH under the patronage of Sayyid Musa Ashiqan in the Janmasthan temple (butkhane Janmasthan mein) in Faizabad-Awadh which was a great place (of idol-worship) and the capital of Rama’s father… Among the Hindus it was known as Sita ki Rasoi (Narain 1993: 29-30).

A translation of the same work provided by Kishore Kunal affirmed that Hindus had begun worship at Babri Masjid and officials kept quiet after accepting bribes,

Then in the Baburi mosque, where there was Sita Rasoi, started the worship openly. Officers, after taking bribes (silver shoes), became their loyal servants. No one took notice. First the saying of Shaikh Ali Haji was true to the situation – ‘The butkhana on the way that was considered a bad place became the abode of God!’ Thereafter, a drastic change occurred – mosques were pulled down and temples were constructed there. But there was a veil of neglect on our eyes and we remained in slumber (Kunal 2016: 259-60).

…. At last, the tussle went to such an extent that except the mosque adjacent to Hanuman-garhi, the Hindus made Butkhana even in the corridor of the Babri mosque where existed Sita Rasoi. The Hindus damaged Ram Ghat mosque also and in its corridor constructed a temple. They started placing garbage in the mosque and constructed magnificent temple from the bricks and stones after digging hundreds of graves of the Muslims (Kunal 2016: 260-61).

Perhaps this described the situation after the Galata conference when the Ramanandis began arriving in Ayodhya in considerable numbers.

Professor Irfan Habib dismissed these works as the product of the communal consciousness of the last 150 years (Muslim India 101, May 1991). It would have contributed immensely to the debate had Professor Habib listed Arabic, Persian, Urdu, Hindavi, Hindustani, or Hindi works that asserted that Babri Masjid was built on virgin land.

In addition to the works listed by Harsh Narain, B.R. Grover and S.P. Gupta mentioned the Gumghasta Halat-i-Ajodhaya Awadh (The forgotten events of Ajodhaya Awadh), by Maulvi Abdul Karim, Imam of Babri Masjid. He cited several contemporary sources in his book. It was translated from Persian to Urdu in 1979 by his grandson, Maulvi Abdul Gufar; who retained the section pertaining to the destruction of the Janmasthan temple and the construction of a mosque in its place. The revised second Urdu edition published in 1981, however, omitted this portion (Grover and Gupta 1991: 152).

Printed with permission from the publisher Aryan Books International. 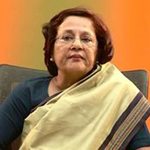 Meenakshi Jain is an associate professor of History at Gargi College, University of Delhi. She was Fellow, Nehru M e m o r i a l M u s e u m & Library, Teen Murti. Her recent works include Parallel Pathways. Essays on Hindu-Muslim Relations (1707-1857). She is the co-author of The Rajah Moonje Pact. Documents on a Forgotten Chapter of Indian History.

The Battle for Rama (Case of the Temple at Ayodhya)