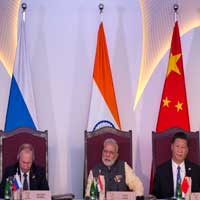 Hitting out at the growing threat of terrorism and asserting the crucial role of BRICS to the global order, the declaration also emphasised on institution building as a key target. Tackling black money and corruption are other focus areas in the declaration.

The need to collectively tackle terrorism to ensure peace, stability and economic prosperity and the focus on institution building within the BRICS as an effective way to pursue the development agenda. These are the two big take aways from the BRICS summit in Goa.

The emphasis on cooperation backed by action to achieve collective goals reflected in the Goa declaration that was adopted after the plenary session concluded.

BRICS nations also pitched for a stronger global commitment for combating corruption and repatriation of blackmoney stashed away overseas. The Goa declaration read:
“We will strive to coordinate our approach… and encourage a stronger global commitment to prevent and combat corruption on the basis of the United Nations Convention against Corruption and other relevant international legal instruments.”

Presidents Xi Jinping of China, Vladimir Putin of Russia, Michel Temer of Brazil and Jacob Zuma of South Africa, and their host, Prime Minister Narendra Modi, also vowed in the declaration to tackle the global economic slowdown and reform the world’s financial architecture.

Investing in infrastructure projects and the manufacturing sector are key to achieving these goals. BRICS leaders also stressed on the need to strike a balance between economic development and environmental protection, and hailed the early entry into force of the Paris climate agreement.