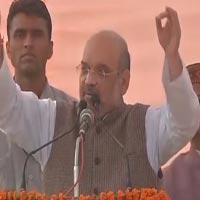 Campaigning continues for UP Elections

Election campaign is in full swing for the third phase of polls in Uttar Pradesh.

Addressing an election rally in Balrampur, BJP President Amit Shah slammed the state government for deteriorating law and order situation in Uttar Pradesh. He said that the state has achieved number one position as far as crime data is concerned.

BSP chief Mayawati today targeted the Samajwadi party in a rally in Jhansi. She hit out at the prevalence of crime under the SP government.