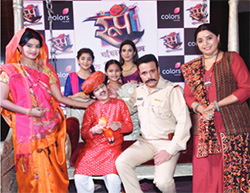 Recently there have been a lot of rumors regarding a few TV shows that might be going off-air soon, such as Star Plus’ Yeh Hai Mohabbatein and Nazar. One show, however, that is going off-air for sure is Color’s Roop-Mard Ka Naya Swaroop, starring Shashank Vyas and Donal Bisht.

The show’s lead actor Shashank Vyas confirmed the news. In an interview with a leading portal, he said, “Yes, the show is ending. Everything good comes to an end. It was a fantastic run until it lasted.” The show is directed and produced by Rashmi Sharma, of Rashmi Sharma Telefilms. The show will be going off-air in May, just a year after it went on-air.

In discussing the reason behind its early wrap-up, a source associated with the show told TOI, “Though the show has a unique storyline, it couldn’t rake in the expected ratings. We have been informed that the show will end in the second week of May.”