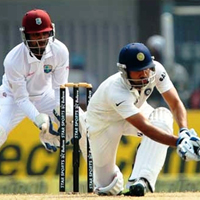 A confident India, with a new coach at the helm, will seek to record a third consecutive Test series triumph on the Caribbean soil when the Virat Kohli-led side clashes with an inexperienced West Indies in the first cricket match, in Antigua from Thursday.

The Test will herald a new chapter in Indian cricket history as the team will take the field for the first time under new coach Anil Kumbles guidance.

More than three weeks have passed since the legendary leg-spinner assumed charge of the squad. Over this period, he has led the team through a preparatory camp and overseen two practice matches in St. Kitts last week.

He has introduced a new bonding spirit in the dressing room, and lifted morale through numerous group activities, thus ensuring a seamless transition from Ravi Shastris tenure as team director.

As such the focus now completely shifts to the field, where the Indian players will try to put in action the plans laid out by their new coach.

In doing so, skipper Virat Kohli will aim to complete a hat trick of Test series wins in the Caribbean, after Rahul Dravid and MS Dhoni led their sides to victory in 2007 and 2011, respectively.

Also, Kohli will be hoping to win a third successive Test series, after beating Sri Lanka 2-1 away and South Africa 3-0 at home, both last year.

It will be easier said than done though. For, the slow pitches in the West Indies will test his teams resolve. The wickets laid out in St. Kitts for the two practice matches had good bounce, but slow turn for the spinners and very little by way of movement for the pacers.

It is expected to be a continuing trend though the four-Test series, although the pitch for this first Test seemed to throw up a surprise.

With two days to go, there was green sprinkling of grass on the surface. It seemed nothing more than patches left to hold the pitch together for five days, and yet it could alter the Indian think-tanks plans regarding the first-choice eleven.

While 13 players had participated in each of the two tour matches, the composition used in both games indicated a five-bowler approach for the Tests.

Skipper Jason Holder will be hoping his two senior-most batsmen can put their hand up, while he looks set to pick an inexperienced batting line-up comprising of Jermaine Blackwood (15 Tests) and Rajendra Chandrika (3 Tests).

Blackwood was impressive in both innings of the second practice match in St. Kitts, but facing the three Indian spinners bowling in tandem during a Test should be a different prospect.

As such, much responsibility will lie on the shoulders of Bravo and Samuels, particularly the latter who is the most capped batsman on either side.

Only Ishant Sharma (68 Tests) has played more matches than him, and this is another area where team India holds the edge. Comparing the two bowling attacks, West Indies look set to field only one spinner in Devendra Bishoo, with fast bowler Shannon Gabriel looking for support from uncapped Miguel Cummins, Carlos Brathwaite and Holder himself.

Head-to-head then, the visitors hold the advantage. But it is no secret that West Indies play their best cricket when on the back-foot. And they will be raring to go at a venue dedicated to one of their all-time great cricketers.