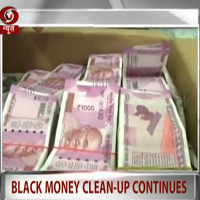 Crack down on black money continues

The search operations continue against suspected black money holders at various locations across the country. Crores of rupees in cash, bullion, jewellery and property papers were seized by the Income Tax department and police at various places.

Crackdown against blackmoney continues across the country, raids & seizures underway. 1.170 kg gold worth Rs 32 lakh & Rs 2.77 lakh cash in old demonetised notes were seized from a passenger at Delhi’s IGI airport on Sunday.The passenger has been arrested.

In one of the biggest raids against black money hoarders. Income Tax department found assets worth Rs. 400 cr in cash, bullion, jewellery and property papers at the premises of financer Kishore Bhajiawala in Surat.

Bhajiwala was being monitored by the Income Tax department, following large deposits made by him in banks, after demonetisaton was announced.

In another incident, 18 lakh rupees in new currency notes were seized from Sector 57 in Noida and three men have been arrested in this connection.

Police said The arrests were made following a tip off that some people were carrying a huge amount of counterfeit currency in Bhishanpura village in Sector 57. Police is interrogating the accused and more arrests and seizures are expected on basis of the information.

In Telangana, the Income Tax department has seized 66 lakh rupees cash in its anti-black money operations held in Hyderabad during the past two days. All the seized cash was in new 2000 rupees notes.

In Madhya Pradesh, Police has arrested two people in Shahdol for printing fake Rs 2000 new currency notes. Printer and scanner have been seized. Enquiry is underway.

Tightening the noose, the Enforcement Directorate, in its third trap, seized Rs 45 lakh, including Rs 42 lakh in new currency, during a raid at the house of the owners of Swami Devi Dyal Group of Institutes, Barwala.

ED also raided their house in Chandigarh. ED officials said Rs 42 lakh in new currency recovered from their house was in Rs 2,000 denomination.

The seizure comes two days after Rs 30.71 lakh, including Rs 18 lakh in new currency, and 2.5 kg of gold was seized during a raid at a tailor’s house in Mohali.

The ED officials said they would investigate the source of the new currency notes.