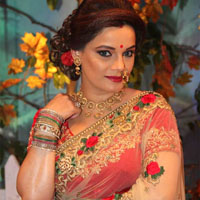 The Kapil Sharma Show on Sony Entertainment Television boasts of a multi-talented ensemble cast who is known for its quirky sense of humour and impeccable comic timing. Now, joining the powerhouse performers will be the beautiful and talented Debina Banerjee and Kanika Maheshwari who are known for their acting prowess. Both the gorgeous ladies will be seen in quirky roles which will take the humour quotient a notch higher.

While Bong beauty Debina will be seen in the role of Kiku Sharda’s wife, Kanika will be seen playing a glamorous Bhabhi who lives in Kappu’s society. Speaking about the same, Denbina said, ”I am thrilled to be part of The Kapil Sharma Show as I have got a chance to work with some of the best artists in the country. I play the role of Kiku’s wife who is extremely glamourous and will be seen donning designer sarees. I have always dabbled in comedy and being a part of this show is a matter of great pride for me. The entire team is very supportive and made me feel extremely comfortable.”

Kanika too confirmed the same and said, “I am thrilled to be part of such an amazing cast and show. Though I can’t reveal much details about my character, all I can say is that it’s going to be a very good role. “