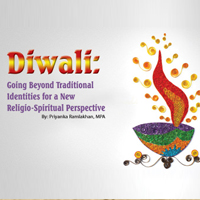 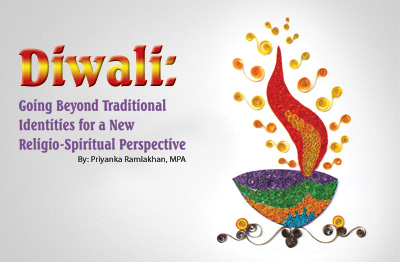 For a Hindu celebrating Diwali in the West, images of diyas, rangoli, and mithai are conjured accompanied by the sweet melody of bhajans. For most Indians belonging to the diaspora, Diwali is not only an observance marked by merriment, but also a powerful means of identity formation, critical to preserving cultural heritage. Indians who have immigrated from all over the world to America have recreated the India of their ancestors along with the memories of how Diwali was celebrated in Trinidad, Guyana, Surinam, Singapore, Mauritius, and other despotically relevant communities. For many families, Diwali marks the time of year where all loved ones come home for the holidays and is an occasion where religious beliefs, family structures and social customs are blended. 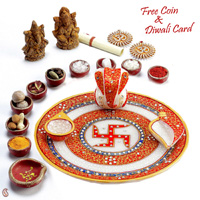 Through the observance of Diwali, the Hindu identity is negotiated according to three inter-related processes—the individual consciousness, religio-spiritual identity and societal identity. Individual consciousness refers to how one posits their unique vision of self through relative and absolute perspectives. Religio-spiritual identity nourishes this through swadhyaya—the study of scriptures and the adoption of religious practices like attending satsangas, engaging in deity worship and bhakti or devotional movements, etc. Identity is further established by the social construct of communal worship. For the Indian diaspora, religious celebrations afford a powerful way of communing with their motherland and customs of antiquity.

Diwali, the Hindu New Year, is a period of rebirth, a new beginning, and a time-marker that brings forward the gems of past as tools for manifesting a divine future rooted in spiritual aspiration. India, a land decked in sacred lore, grants no shortage in the mystical implications of Diwali. Diwali traditionally celebrates three events derived from the Ramayan and Srimad Bhagavat Puran—Sri Rama’s return to Ayodhya, Lord Krishna’s destruction of the demon Narakasur, and the marriage of Lord Vishnu and Goddess Lakshmi. 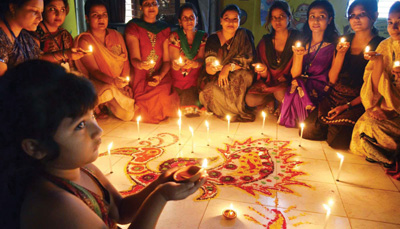 Each of these stories represents an allegorical depiction of the proverbial fight between good and evil, the union of the devotee with God and the overall triumph of light. Light, is a reoccurring motif within Hindu sacred texts symbolizing that which is eternally true, or Sat. The lighting of diyas is an outward expression of the triumph of light over darkness—dharma (righteousness) over adharma (unrighteousness) and the intellects victory over ignorance. In the practice of Integral Yoga, light becomes the discipline in raja yoga, the insight in gyana yoga, the action in karma yoga and the divine feeling in bhakti yoga. As Swami Jyotirmayananda says, “Pour the oil of pure feeling into the lamp of the heart. Burn the flame of aspiration; kindle the ego by the fire of Divine Love; keep trimming the wick through enquiry and surrender.” In this way a tremendous ideal is placed before all devotees with the lighting of each lamp. Furthermore, with regards to negotiations of spiritual identity, every lamp acts as an initiation into a deeper understanding of “Who am I?” as the intellect turns intuitional.

From practical means, during the time of Diwali, Hindus all over the world speedily clean their homes, wear new clothes, celebrate with sweets and gifts and most importantly, light rows of clay lamps so as to invite Lakshmi Devi into their homes. The practice of cleansing the external world is reflective of the spiritual movement of sadhana, where the goal is purification of the mind or chitta shuddhi. Ritualistic performances such as cleaning, preparation of prasad and sweets and poojas offer themselves as outlets for worship. Lakshmi Devi, the bestower of prosperity is the center of adoration and presides over worship during this auspicious time. 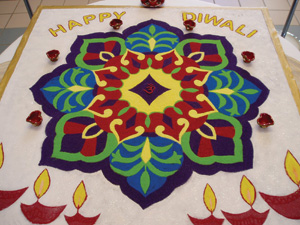 Lakshmi Devi in her representation of name and form is highly mystical. The name Laskhmi is derived from the word “lakshva—the goal” and is also related to the word “laksha—one hundred thousand.” Her four arms represent the four purusharthas or aims of life: dharma—ethical value, artha—material value, kama—vital value, and moksha—freedom from bondage. The lotus flower upon which she sits is a classical symbol of detachment, presenting the ability to be involved in the physical world of matter while remaining ever-detached. The showering of gold coins through her hands denotes both material and spiritual wealth. Spiritual wealth is understood in the form of daivi sampat—the divine wealth of virtuous qualities. The depiction of elephants symbolizes wisdom and auspiciousness. The naturally large ears of an elephant highlight the trajectory of spiritual attainment beginning with listening. Sravana—listening, manana—reflection and nididhyasana—meditation are the means by which knowledge is ascertained by an aspirant. 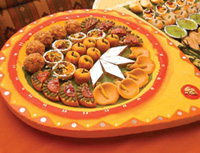 Overall, by installing the Divine Feminine onto the altar of the heart, Hindus in every part of the world draw strength, prosperity and intuitional insight during the sacred observance of Diwali. From a relative point of view, Diwali celebrations aid in the construction of personal identity for one who is tied to religious customs and traditions of a certain race. However, from an absolute standpoint, Diwali is not a festival that occurs once a year and is designated exclusively to a particular group of individuals. The illumination of Diwali is ever-present as each day souls rekindle their movement towards the Divine Mother, God the Absolute. Therefore as diasporic communities leave behind their physical country and take with them their high ideals of religion and culture to new lands, so to the spirit within sheds its previous entanglements for an identity established in Divine unification. 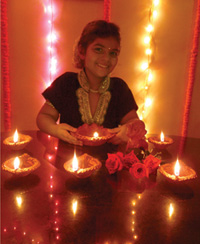 About the Author
Priyanka Ramlakhan is a student of Vedanta Philosophy under the tutelage of Swami Jyotirmayananda and is presently completing a Master’s Religious Studies. Learn more about her
by visiting her blog at www.aspiretoyou.com.