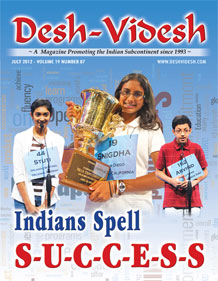 I’m pleased to present one of my favorite subjects in this issue – Indian kids excelling in the United States due to their hard work (and their parents!). While doing research for this issue of Desh-Videsh, I have been reading many blogs, which include comments from Indians and non-Indians. Unfortunately, many of them do not want to give credit where credit is due, which is how Indian kids and their parents make hard work the main focus in life. I hate to criticize the people of our Karmabhumi – USA, but the evidence is very clear. It is not school teachers, the number of students in class, or the public school system. Indian kids who excel in this country go to the same schools and attend the same large classes. Parent involvement and keen interest in their kids makes a big difference in a child’s development. When you attend sessions of some after school programs, such as Kumon, Aloha Math, Monkey Math, Vedic Math or E.nopi, you will find Indian students in the majority. On the weekends, you will see many Indian kids on soccer fields or tennis courts. Similarly, a significant number of kids attend Bal Vihar classes at Hindu temples and religious centers like Chinmaya mission centers. One might argue that soccer, tennis, and Bal Vihar have little to do with Spelling Bee, science tournaments, or the National Geographic competition. In my mind, it shows kids that their parents care. These activities also leave little time excessive video games, television, tweeting, and text messaging.

Now, let’s turn to news in India and discuss a popular television show Satyamev Jayte on Star Plus Channel, produced by Aamir Khan, the relative of freedom fighter Maulana Azzad. Over seventy years ago, Maulana Azzad joined Gandhiji’s revolutionary movement. He then became the first Minister of Education in the Indian government. In the same way, Aamir Khan has started a revolutionary movement that educates the Indian general public about social issues such as woman abuse, abortion, and handicapped people. It is a very noble cause, and it is high time that some of these social issues became a focus for Indians. One of the most important things I enjoy about the show is how Khan points out a problem and then he shows how to solve it. The show also talks with real people who are victims, and they explain how they came out of the problem. Interviews with social workers from different parts of India point out solutions to these century old problems.

Last but not least, let me respond to all the positive comments and thank yous we received for the cover article, Passage to India, which took place at the South Florida Hindu temple. Most were thrilled to see kids from the community on the cover. We very much appreciate your feedback, though we are simply doing what our mission dictates – to promote the Indian sub continent, as it exists in the US.