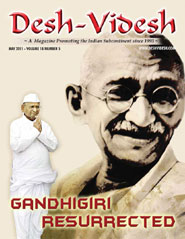 On behalf of the entire Desh-Videsh team, I would like to wish everyone a Happy, and more importantly, a Healthy New Year.

As a lifelong admirer of Gandhiji, I feel very proud to know that his philosophy recently termed “Gandhigiri” is still alive. It is especially very refreshing to know that it is alive in India despite the fact that the rest of the world sometimes violence as a path to solving problems. In the article “Gandhigiri Resurrected,” the recent Anna Hazare case is discussed, but I would also like to give credit to Prime Minister Dr. Singh’s team as well. As they say, it takes two to tango, and that is certainly true in this situation. Credit goes to Anna Hazare, his supporters, and the Dr. Singh government.

The Indian Cricket team also inspires great pride. The way the team played in the last three matches in ICC world Cup, first against Australian team, then Pakistan team and finally against Sri Lankan team, shows they are truly the best cricket team in the world. It was very exciting to watch the match live early that Saturday morning at the Bombay Grill in South Florida when fans played the dhol each time an Indian player took a wicket or scored a run. Imagine the excitement and pride when the Indian team won! Watching all the players including Dhoni give full credit to Sachin Tendulkar, and witnessing them carry him on their shoulders all over the field gave me goose bumps. There is no doubt Sachin is a great cricket player. Let me correct myself – he is one of the greatest cricket players in the world. Unfortunately he did not score very well in the final against the Sri Lankan team, but still the team credited him for the victory. This shows modesty on the part of all the players including team captain Dhoni. Once again, I feel that this type of gesture stems from centuries of old Indian culture. Qualities like nonviolence, modesty, team effort and lack of ego are the types of virtues our forefathers wanted us to carry on for all time.

Given this issues highlights our pride in Indians, we would like to congratulate another Indian – Dr. Siddhartha Mukherjee for winning the Pulitzer Prize for his book The Emperor of All Maladies. Read more about this fascinating book in this month’s Book Review column.

Last but not least, Aruna and I are very proud of the Desh- Videsh Media Group and MyShadi Bridal Expo team members. With the help of our team, customers, supporters, and of course, everyone who attended the show in Atlanta, we pulled off a very successful show. Aruna and I would like to thank each one of you from the bottom of our hearts.

We are now gearing up for our next MyShadi Bridal Expo in Orlando this coming September. We hope to see you all there and look forward to continued cooperation from all of our partners.