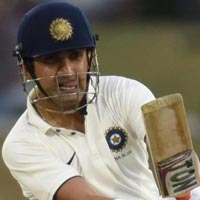 Gautam Gambhir back in test squad

Gautam Gambhir makes a come back to Indian Test Squad as he is recalled to the team in place of injured KL Rahul for the next two test matches against New Zealand.

The announcement came late on Tuesday as Team India landed in Kolkata for the second Test scheduled on Friday .

Gambhir’s impressive show in the recent Duleep Trophy brought him back to the team after a gap of two years.