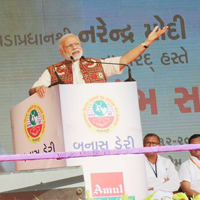 Prime Minister Narendra Modi is in Deesa in Banaskantha district of Gujarat where he inaugurated a cheese and whey plant set up with state-of-the-art technology at a cost of 350 crore rupees at the milk co-operative dairy plant of Banas dairy.

Milk of the famous Kankrej variety of cow of this area will be used at this plant.

Speaking at a rally in Deesa Prime Minister Narendra Modi hit out at the opposition for not allowing Parliament to function.

An anguished Prime Minister said that since he is not being allowed to speak in Lok Sabha, so he is speaking in the Jan Sabhas.

The Prime Minister said the farmers in Banaskantha heard my request and embraced drip irrigation.

He added that this has changed the lives of people here and lives of future generations.

PM Modi said that along with ‘Shwet Kranti’ in Banaskantha, there is also a ‘Sweet Kranti.’ He added that People are being trained in honey products.

Prime Minister Narendra Modi was welcomed on stage with garlands and gifts.

He was given a colourful jacket made by local artisans and a traditional turban was tied. Women members of the Amul co-operative also welcomed PM Modi.

PM Modi said that India wants to progress and Corruption and black money is slowing our progress and adversely affecting the poor. He added that these evils have to end.

He also said that today banks and wallets are in your mobile and this is how things have changed.