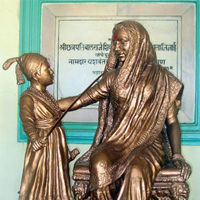 Shivaji and his Mother Jijabai

May 12 is Mother’s day. The Desh-Videsh team would like to wish all the mothers out there a very Happy Mother’s day. Below are some excerpts from Hindu Scriptures on mothers and women.

In the Mokshadharma Parva (Section CCLXVI),Bhishma said:
The mother is the panacea for all kinds of calamities. The existence of the mother invests one with protection; the reverse deprives one of all protection. The man who, though divested of prosperity enters his house, uttering the words, “O mother!”- has not to indulge in grief. Nor does decrepitude ever assail him. A person whose mother exists, even if he happens to be possessed of sons and grandsons and even he himself is hundred years old, but in the eyes of his mother he looks like a child of two years of age. Whether the mother is able or disabled, lean or robust, the son is always protected by the mother. None else, according to the ordinance, is the son’s protector. Then does the son become old, then does he become stricken with grief,then does the world look empty in his eyes, when he becomes deprived of his mother. There is no shelter like the mother. There is no refuge like the mother. There is no defense like the mother. There is no one so dear as the mother. For having borne him in her womb the mother is the son’s dhatri. For having been the chief cause of his birth, she is his janani. For having nursed his young limbs, she is called amva (Amma). For nursing and looking after the son she is called sura. The mother is one’s own body.

Shri Swami Ranganath-ananda from Sri Ramakrishna Ashrama explains motherhood as follows:
It is in this sphere that Indian thought, with its spiritual view of life, has much to contribute to steady the feet of men and women in East and the West. Motherhood is a spiritual transformation of wifehood. The wife may and does demand and take; but the mother feels it her privilege to give. If woman as wife is socially significant, woman as mother is spiritually glorious. The culture of the Hindu trains him to look upon all women as forms of the one Divine Mother.

The mother is more worthy of reverence than father or teacher according to our scriptures. 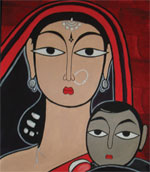 Some thoughts by Manu Smriti (ii. 45):
“From the point of view of reverence due, a teacher is ten fold superior to a lecturer, a father a hundredfold to a teacher, and a mother a thousandfold to a father.”