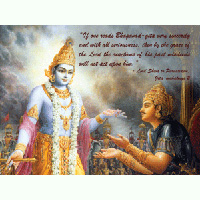 How Hinduism Makes Me a Better American

I tried an experiment last year in which I attempted to go a week without buying anything from China. My choices as a consumer were severely limited. It was nearly impossible to find clothes, gifts or even nails to hang up a picture frame. Since finding non-made-in-China alternatives were rare occurrences, I often just did without. At first, I was frustrated and sad. Coming home from the mall empty handed made me feel just as empty on the inside.

It was my religion, Hinduism, that brought me to the realization that material possessions will never fulfill me. Being a Hindu makes me a better American because it helps me see with clarity the American dream, and the pursuit of happiness, as something that is materially intangible, but much more satisfying when achieved.

Stuff – material stuff – will never really satisfy you. A lot of people spend their whole lives trying to accumulate as much of it as possible, but as Hindu philosophy teaches us, you have to give up all material desires if you ever really want to be happy.sense gratification because sense gratification is the cause of our bondage in this material world,” A.C. Bhaktivedanta Prabhupada, a Vedic teacher, said in a lecture in New York in the 1960s. This recession is particularly hard on people because shrinking budgets, both for government bodies and personal wallets, has meant everyone has had sacrifices. For some people, it means they can’t take a vacation that year. For others, it means they’re not sure how they are going to fund their next meal. As the middle class disappears, so do the stories about people buying bigger televisions, bigger cars and bigger houses. But if we are to be good Americans, we can’t dwell on the things that are gone and keep postponing our dreams till “when the economy turns around.” We have to learn to find joy in ingenuity, creativity and innovation.

For example, I started a container garden on my patio last year to save some money. My yield was semi-successful. I let my spinach flower too fast and didn’t water my mint enough. But I got some fresh, juicy tomatoes and bell peppers. If I had gone to the grocery store, I would have picked up a tomato off the shelf and bought it. But planting the seeds, watching the plant grow and knowing I was capable of making food brought me a separate joy. My friends have found similar satisfaction in stitching their own clothes, brewing their own beer and building their own furniture. Americans are innovative, and we should all embrace the innovators within ourselves. It’s much more satisfying than buying all of our solutions.

As Americans, we also have to be mindful of effect materialism “You cannot become progressive in spiritual life if you indulge in unrestricted has on the environment. The Bhagavad Gita tells us, “For, so sustained by sacrifice, the gods will give you the food of your desire. Whosoever enjoys their gift, yet gives nothing, is a thief, no more nor less.” The materials economy (extraction, production, distribution, consumption, disposal) is a system in crisis, Annie Leonard, author of The Story of Stuff, explained in a YouTube video. “It’s a linear system and we live on a finite planet and you cannot run a linear system on a finite planet indefinitely,” she said. “We are running out of resources, we are using too much stuff.”

If we buy things we don’t really need and will probably throw away within a year, we’re wasting those precious resources. By purchasing clothes second-hand, by recycling my papers and plastics, and not buying that iPad that it would be nice to have but I don’t really need, I am not thieving from the environment. All Americans can make the decision to buy higher mileage cars to reduce the amount of oil they use. Or better yet, they can take public transportation when possible. When we take the time to understand where all our materials come from and what they truly cost, we start to see that the things we buy cost a lot more than what we pay for them. Sometimes it seems like materialism is the dominant religion in America. But by breaking free from that cycle of desire and focusing on what’s really important, like ingenuity and innovation, I have become a better American. By reducing my material desire, I’m also reducing my impact on the environment. I’m a Hindu, and that’s what helps me see the real American dream – finding happiness within myself.

Vinti’s Biography
Vinti Singh, 24, is a reporter for the Connecticut Post, a Hearst Connecticut Media Group newspaper in Bridgeport, Conn. She reports on municipal issues, as well as energy and environment policy. She grew up in a suburb outside of Philadelphia and she graduated from the University of Missouri with a degree in journalism and a minor in women’s and gender studies. The Bhagavad Gita tells us, “For, so sustained by sacrifice, the gods will give you the food of your desire. Whosoever enjoys their gift, yet gives nothing, is a thief, no more nor less.”

Post Views: 1,172
Gandhiji’s Words and Actions are Alive on Campuses Even Today
The Evolution Of Diwali And Its Relevance To The World