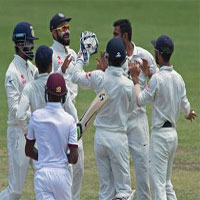 India defeated West Indies by an innings and 92 runs in the first cricket Test to take a 1-0 lead in the four-match series in Antigua late on Sunday.

India notched up 566 for eight declared in their first innings and then bowled out West Indies for 243 to take a lead of 323 runs.

Forced to follow-on, West Indies were bundled out for 231 in their second innings. R. Ashwin picked up seven wickets and declared man of the match.