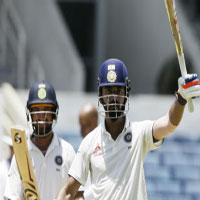 Opener Lokesh Rahul showed a lot of composure hitting a career-best 158 as India reached a comfortable 358 for 5 on the second day thereby taking complete control of the second cricket Test against West Indies.

For two sessions on the second day, West Indies’ bowlers were ground into the Sabina Park turf by two batsmen who understood the ebb and flow of Test cricket perfectly. Starting at the overnight score of 126/1, Lokesh Rahul and Cheteshwar Pujara looked to play for time, as there was still something in the pitch for the bowlers.

It obviously affected the run-rate, as only 22 runs came in the first hour of play, with Pujara taking 35 deliveries to get off his overnight score of 18 not out.

Soon enough, Rahul hit out in the 56th over and deposited Chase for a six over long-on, and brought up his hundred off 182 balls. In doing so, he notched up the highest score for an Indian opener playing his very first innings in the West Indies.

At the other end, Pujara struck two boundaries to break the shackles and finally got his strike-rate going, as India went into the lunch break in consummate control.

Even as the batsmen looked for runs, they had to take some risks, and in doing so Pujara was run-out after a direct throw from square leg found him short of the crease.

Rahul suffered cramps thereafter, but kept going as Kohli joined him. India went past the 250-mark in the 90th over, as the two batsmen put up 50 runs for the 3rd wicket off 106 balls.

Just before tea, Rahul went past the 150-mark for the first time in his Test career. Rahul had a 69 run stand with skipper Virat Kohli, who scored 44 off 90 balls. By the time, Rahul was adjuedged caught behind down leg-side off Shanon Gabriel, he had put India in driver’s seat.

Kohli, who has been in sublime form was dismissed just when he was looking to take on the spinners. Ravichandran Ashwin was adjudged leg-before off a Bishoo delivery that hit the toe.

Rahane and Saha negotiated the remaining 12.5 overs adding 31 runs with minimum fuss. At stumps, India had consolidated their lead to a sizeable 162 runs despite only 232 runs being scored in the 88 overs bowled in the day as the visitors looked to grind the home team with an aim of outbatting them.