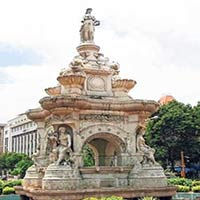 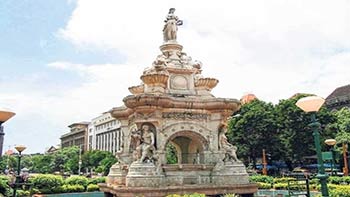 UNESCO Asia-Pacific Awards for Cultural Heritage Conservation were recently announced, and four heritage landmarks of India are on the list. The four winners from India are – Mumbai’s iconic 155-year-old Flora Fountain, Keneseth Eliyahoo Synagogue at Fort, Our Lady of Glory Church at Byculla, and Vikram Sarabhai Library at the Indian Institute of Management in Ahmedabad.

The UNESCO Asia-Pacific Heritage Awards were announced this year at a ceremony held in Penang, Malaysia, marking the 20 years since its institution. The idea behind the awards is motivate the protection of Cultural Heritage sites. In a statement, UNESCO Asia-Pacific said, “Sixteen projects from five countries – Australia, Bhutan, China, India, and New Zealand – have been recognized by the international Jury of conservation experts in this year’s awards. The jury met in August to review 57 entries from 14 countries across the Asia-Pacific region.”

Inspired by the Victorian style of architecture, the Flora Fountain was restored between July 2017 and October 2018. It has been awarded the ‘Honourable Mention’ award. Announcing the winners UNESCO Tweeted, “The careful restoration of the (flora) fountain completes the series of conservation interventions to revive the city’s many Victorian-era fountains, a collection of ornate civic monuments unique in India.”

Keneseth Eliyahoo Synagogue won the Award of Merit. Built in 1884, the Synagogue was restored between 2018 and 2019. The citation of Synagogue read, “The sensitive upgrade of building services allows the synagogue to continue its vital services to Jewish devotees, extending the cultural continuum of the oldest Baghdadi synagogue of the city.”

Even the Our Lady of Glory Church in Mumbai received the Award of Merit. It is one of the oldest Roman Catholic churches in the city, built in 1911-1913. The fourth Indian site to receive an award at the ceremony was Vikram Sarabhai Library at the Indian Institute of Management in Ahmedabad. It received the Award of Distinction.

Our Lady of Glory Church

Indian Institute of Management in Ahmedabad