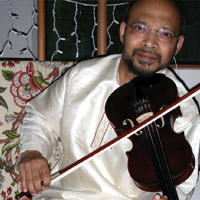 The Violin: An Indian Instrument?
Globalization in music is not a recent phenomenon which can be attributed to MTV. It started much earlier than we give it credit. The violin it self was introduced to India by the British during the late eighteenth century. Hindustani and Karnatic music were well-defined by this time. There was one main difference though Hindustani music had a bowed instrument in its repertoire, the sarangi, whereas there was no such definite instrument in Karnatic music. As a result, once the violin presented itself to Karnatic music, it was assimilated much faster. It is now seen almost ubiquitously in vocal, instrumental, and dance concerts.

The violin is also a sought after instrument because among all instruments, it is the closest to the human voice in tonality and versatility. As a result, it often supports a vocalist, in between a vocalist’s rest period where it takes over the melody part. It is also a solo instrumentin its own right.

The violin has four strings (similar to the sarangi) over a wooden body. Unlike the guitar or sitar, it is fretless thereby requiring very precise positioning of fingers. A fret is the raised portion on the neck of instruments (like the guitar) which defines the possible places the fingers can move. Since the violin has no frets, strings cantake any vibrating length, and thereby produce all possible sounds from one note to the next.

This can be understood by considering that most instruments allow us to go from one note to the next discretely (if you think in terms of a piano or keyboard, then from any one key to the very next key). Additional notes between the two consecutive keys (which cannot be played on a piano) are called microtones or srut is. These can be played on the violin by adjusting the length of the string. The violin became an even more important part of Karnatic music as microtones are very important in this style .

In the West, violins are normally played standing or sitting on a chair. This leads the violin to beheld between the shoulder and chin. In this position, it is supported by the collarbone and shoulder. At times, shoulder pads and chin rests allow for more stability, comfort, and extended period of playing. The traditional Indian style, however, is to play sitting down. The violinist sits cross legged on the floor with the neck of the violin sitting on the right ankle and the opposite end resting on the left shoulder.

A more recent phenomenon is the advent of the electric violin which is more common in jazz. Both L. Shankar and L.Subramanium have experimented with it with great success.

In this issue, we talk with Amitava Sen, a violinist based in Atlanta. He is a disciple of Professor Rabin Ghosh whose Guru, the Late Ustad All auddin Khan, founded the Maihar Gharana. In the United States, he studied with virtuoso violinist Yosef Yankelevat Emory University. Amitava has performed and composed music in a variety of styles, blending Indian with Chinese, Middle Eastern, and Western instruments. He is part of the musical group The Violin: An Indian Instrument? Sangeetkar which has been featured in public television, public radio, and special events. Amitava Sen can be reached through his website at

Amit: What kind of violin music do you play?

Amitava: I primarily play Hindustani or North Indian classical music. My earliest violin lessons, however, were in the Karnatic or South Indian style. Also play in a fusion music group blending Indian music with Western new age and jazz styles. In the group called Sangeetkar, we play semi-classical Indian and folk music, blending the folk music of India, Bangladesh, and Afghanistan.

Amit: Which playing position makes you feel more comfortable- sitting down or standing/using a chair?

Amitava: It depends on the type of music I’m playing. For Western or light Indian music, the standing position, or sitting in a chair, gives a better control of the bow and allows me to be more expressive. However, when playing Indian classical music, since the performances are longer in duration, and basically you are composing while you are performing at the same time, sitting on the floor is more comfortable. It also lets you be on the same level, and maintain eye-to-eye contact with your accompanist the tabla player and other musicians especially if you are performing ajugalbandi or duet. Amit: As a scientist yourself (goldmeda list from the Indian Institute of Technology, Kharagpur), how do you see the role of the violin in the lives of Nobel Prize winners like Einstein and C. V. Raman? Amitava: C. V. Raman wrote many articles dealing with the theory of the musical instruments of the violin family, and Einstein enjoyed classical music and played the violin. Einstein is believed to have credited the periods of improvisation on his viol into leading him to some of his greatest insights. There is a famous quote by Einstein, who said,” A table, a chair, a bowl of fruit and a violin; what else does a man need to be happy?” Yes, I do believe that studying the violin, and classical music in general, does enhance creativity, developing various areas of the brain, and may have helped them become great scientists!

Amit: What are some of your favorite CDs? What are you listening to right now?

Amitava: It is difficult to say which are my favorite CDs I love the Tchaikov sky and Mendelssohn violin concertos, Fritz Kreisler playing his own compositions, Itzhak Perlman’s performance of famous shorter pieces, Yehudin Menuhin’s Bach sonatas and partitas for solo violin, L. Subra maniam’s and L.Shankar’s fusion pieces, N. Rajam’s performances of Indian classical ragas, as well as Kala Ramnath’s recordings. Many old recordings, which were on vinyl albums, are now available on Indian music websites, and that has been a real boon for passionate Indian music lovers – I’m falling in love again with Ustad Amir Khan’s khayals, BegumAkhtar’s ghazals, Pandit Nikhil Banerjee’s and Ustad Vilayat Khan’s sitar, and Ustad Ali Akbar Khan’s sarod. Recently, I am enjoying some of today’s songwriter/ singers such as Nora Jones, Rosanne Cash, and Bonnie Raitt. The world of music is so rich that I’m continually finding new aspects, both in Eastern and Western music!

Amit: The Indian style of violin playing got a lot of attention from L. Shankar playing with John McLaughlin, and L.Subrahmanium playing with Yehudi Menuhin. Do you see this style of playing going mainstreaming the West?

Amitava: Credit for this attention goes equally to John McLaughlin and Yehudi Menuhinfor being interested in performing this kind of music with Indian artists, as well as to L. Shankar and L. Subramaniam to adapt their style to something the Western ear can appreciate. In Western music there are so many genres -from classical to jazz, pop, country, folk, hip-hop, reggae, new-age, and so forth – each with its own following. The people who are moved by the strong melodic lines, rather than, say foot-tapping rhythms, will definitely love Indian style violin playing, not only that of L. Shankar and L. Subramaniam. After all, the violin, as an instrument, is familiar to people all over the world, and its music touches the heart of listeners every where

.Amit: You are setting up a recording company. How receptive do you see the American audience to your music?

Amitava: My venture into recording albums is still in the fledgling stage. So far I’ve created a few albums, all of them Bengali music .I composed my first album of modern songs using my own lyrics, which I have been writing since my teenage years. The other albums are based on Rabindranath Tagore’s songs, which should be loved by those who like Tagore’s music and poetry. I have plans to record some fusion and classical instrumental music albums next, which will have a broader appeal to both Indian and American audiences.

May 2008
Healthy Yet Refreshing Summer Drinks