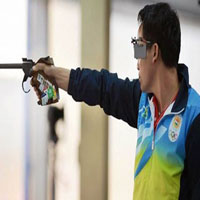 Star Indian shooter Jitu Rai was way off the mark today in the men’s 10m Air Pistol final, finishing a lowly eighth to bow out of the competition in the Rio Olympics on Sunday.

Army’s Jitu, bronze medalist at Incheon Asian Games in the event in 2014, shot an overall 78.7 to finish eighth in the field of eight finalists to become the first shooter to crash out of the final round.

The 28-year-old got off to a poor start and could not recover from it in a highly competitive line-up, which included the likes of Hoang Xuan Vinh, Pang Wei, Wu Felipe Almeida, Tuzinsky Juraj, Jin Jongoh, Gontcharov Vladimira and Giordona Giuseppe.

After taking three shots, Jitu could only reach a total of 28.9. He followed it up with another poor shot of 9.7 to remain at the bottom of the heap.

Jitu desperately needed a qualify shot to avoid elimination but a shot of 10.1 in the end could not help his cause and he became the first shooter to walk out of the final round.

Vietnam’s Vinh finished with the gold with 202.5, while Almeida of Brazil took the silver and China’s Wei settled for bronze.

Jitu is now left with another event in the Olympic Games — 50m pistol, which is his forte.

Earlier in day, Jitu was impressive to qualify for the finals. He fired his way to 580 points with sequence of 96 in the first two series followed by 98, 96, 96 and 98. He shot 22 X to finish sixth out of 46 competitors in the qualification round.

However, Gurpreet Singh, India’s other participant in the same category, failed to advance.

Learn from the 20-something Year Olds: Invest in YOU
5 interesting facts about ‘Chaani’ – Pooja Hegde in ‘Mohenjo Daro’