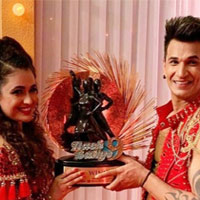 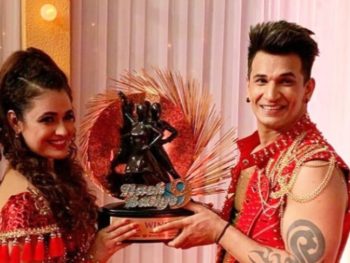 The season 9 of Nach Baliye has been in the news ever since it began. Whether it was due to the unique concept of bringing together ex-couples on the show or the multiple injuries and mishaps that different contestants faced during the last three months. And even before the show’s finale episode airs, the show’s winners have already been leaked.

The latest news from the dance reality show sets revealed that Prince Narula and Yuvika Chaudhary have won Nach Baliye 9. A number of photos and videos were leaked online that showed the couple and their family members celebrating their victory. The photos also show Prince and Yuvika receiving their winning trophy and cash prize from the show’s judges. The video that leaked the names of the winners shows the couple in a red outfit for their finale performance.

Prince Narula is one of Indian television’s favorite reality stars. He has earlier won reality shows like Roadies X2, Splitsvilla 8 and Bigg Boss 9. Prince and Yuvika met and fell in love while they were participating in Bigg Boss. The couple got married in October last year. Yuvika has worked in TV shows like Astitva…Ek Prem Kahani and Bollywood movies including Om Shanti Om, Toh Baat Pakki, and Veerey Ki Wedding.

Prince and Yuvika have been a favorite jodi during the competition for both the fans and the judges. The couple were in the top 3 of the finale along with husband-wife jodi Anita Hassanandani-Rohit Reddy, and ex-couple Madhurima Tuli-Vishal Aditya Singh. Anita and Rohit were the first runner-ups of Nach Baliye 9. Madhurima and Vishal came on number three, while Aly Goni and Natasha Stankovic held the fourth spot, and Shantanu Maheshwari and Nityaami Shirke came on number 5.

Nach Baliye 9 has been produced by actor Salman Khan’s production house. Bollywood actor Govinda was the special judge for the finale episode.