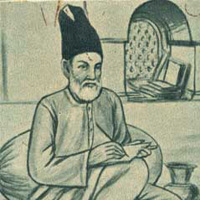 We roll back the years till we see Ghalib as the child of a feudal aristocracy, embodiment of a class, rather than of a class, rather than of a nation, for nationhood had not yet been born in India. We see him happy, while his father and uncle were alive after their death Ghalib became a part of the extended family of cousins.Interestingly at the age of 10, Ghalib was already writing verse, not indeed his best, for it was rather florid, but it was promising. His ghazal were shown to Mir Taqi Mir, the cham of his age, whose contempt for his contemporaries was a byword. Mir read the poems and remarked laconically that if a competent mentor could be found to guide the boy, he would become a great poet.

Perhaps Mir was right, Ghalib found his “mentors” not in any particular person, but in the atmosphere in which he lived. The correct writing of Urdu poetry was a matter for intensive study.

Young Ghalib
Ghalib who had by now moved to Delhi was obsessed with the city. His house on the corner of Ballimaran and Gali Qasim Jan was built on the customary Delhi pattern. High brick facade facing the street, surmounted by arched corridors on three sides that enclosed an open courtyard. Since he needed privacy, the structure suited him.

Ghalib had already begun to use the sophisticated idiom that was to distinguish all he wrote. “There are two Ghalibs”, he said. “One is the Seljuk Turk who mixes with badshahs (emperors) and the other is poor, in debt and insulted”. Ghalib, indeed, was dogged all his life by the problem of how to maintain a standard of living worthy of his class with very small, income.

Ghalib was a part of his city and his times. He dallied with several women, accepted the institution of the courtesan without censure, and at the age of 23, had what was the most traumatic love affair of his life. He wrote later of this, though we know little of the girl, who died early. “In the days of my youth, when the blackness of my deeds outdid the blackness of my hair and my heart held the tumult of the love of fair-faced women. Fate poured into my cup too the poison of this pain, and as the bier of my beloved was borne along the road, the dust rose from the road.”

Hard time of Ghalib
Like most Muslims of his time and class, Ghalib almost invariably lived beyond his means, though these were never really substantial. The story of his pension has been told too often to be repeated here. But it took years for this battle to be fought and lost. It is said that when heavily in debt, he would not stir out of his house. But once, he was summoned to be physically present at court. The presiding judge asked Ghalib if he had anything to say in his defense. Ghalib replied:

“Indeed I drank on credit but also knew for sure my spend-thrift poverty one day, my ruin would procure”.

The judge smiled, decided the suit against Ghalib, but paid the money due from his pocket. This was, however, a rare instance of official magnanimity.

Ghalib – the Poet
Meanwhile, Ghalib continued to write poetry in a fine frenzy. He first compiled his Urdu verse in 1821. Four years later he collected the general principles of Persian letter writing in a popular booklet Panj Ahang. In 1828 he complied Gul-I-Rana, a selection of Urdu and Persian verse. His Urdu Diwan was first published in 1841 and sold out immediately. It was reprinted in 1847. As late as 1855, Ghalib complained that he could not lay his hands on a copy – the booksellers had taken them all. A collection of his Persian verses appeared in 1845.

A critic says of Ghalib that his vocation was not only writing poetry, but in a much broader sense, it was the mastery of all attributes of literary excellence. He also wrote prefaces and introductions to other writer’s works.

And so Ghalib continued to live his life as destined. During summer he lived in a dark little room over the main entrance to his house. In winter he sat in the adjoining verandah where the sunlight came in. He drank wine in the evenings – French wine when he could get it, diluted with rose water. He played chess and chausar (backgammon). He ate mangoes, a compulsive addiction. The ups-and downs that characterized his life were for him, as for all men, a source of joy, a source of grief. The shortage of money was a constant irritant, and his health disturbed his many “friends”. He ate a diet almost entirely of meat and bread.

Mustafa Khan Shefta
Gambling played an important and crucial part in his life. Once he hosted a session that the police broke up. His guests appear to have been let off, but he, as host, was sentenced to a six-months imprisonment. Most of his friends deserted him. One man remained loyal – Mustafa Khan Shefta. Shefta did his best to have the prison sentence waived but did not succeed. Ghalib was, however, released after three months. Shefta defrayed the expenses of the trial and appeal. He paid the fine. During Ghalib’s imprisonment he visited the poet almost daily. Ghalib remained indebted to him for the rest of his life. In a famous poem, Habsiyya, written in prison Ghalib paid Shefta tribute. On his release, Ghalib wrote the famous couplet:

”Let us remove to such a place
”Where none else should be,
”None to speak one’s tongue
”Or share one’s thoughts
should be;
”Build a house sans walls or floor,
”No neighbor, no person,
close should be,
”If one is sick, none need
be there to care
”And if one were to pass away
”Nobody to mourn should be.

The new phase in Ghalib’s life
Life went on, and so did the loom of history. Mughal power slowly dwindled. British power grew and by 1842, they were securely installed as the rulers of India, with their capital at Calcutta. Delhi felt the reverberations of their rule, and Ghalib registered these.

Delhi College opened and he was offered the post of Professor of Persian. Thomason, Secretary of the Government of India, asked him to come in for an interview. Ghalib alighted from his customary palanquin, expecting Thomason to come out and receive him.

Thomason did not do so, and explained that he saw no reason to follow the custom as Ghalib was coming in the capacity of applicant. To this Ghalib replied: “I contemplated taking a government appointment in the expectation that this would bring me greater honor that I now receive, not a reduction in those already accorded to me.” Thomason said: ” I am bound by regulations”. Then, said Ghalib ” I hope that you will excuse me”, and left.

The incident is a typical example of the clash of cultures. There is still something to be said for Ghalib’s insistence that a bureaucracy that overlooks the standing of a poet does so at its own historic risk.

Zauq, poet to the Emperor Bahadur Shah Zafar, died in 1854, and Ghalib succeeded him as the King’s ustad. There is a legion of anecdotes about this period, but one of the best is that once when the king was present in court, the conversation turned on the close relationship between the medieval saint Nizamuddin and his personal poet-friend, Amir Khusro. Ghalib sprang to the occasion with:

Disenchanted Ghalib
And then came 1857, the First War of Indian Independence broke out and power was formally transferred from the Mughals to the British. Ghalib is an invaluable chronicler of this turbulent period. The structure of Delhi crumbled as if in an earthquake. One by one, Ghalib saw the bazaars – Khas Bazaar, Urdu Bazaar, Kharam-ka Bazaar, disappear, whole mohallas (localities) and katras (lanes) vanished leaving not a trace behind. The havelis (mansions) of his friends were razed to the ground. Ghalib wrote that Delhi had become a desert. Water was scarce. Delhi was now ” a military camp”. It was the end of the feudal elite to which Ghalib had so consciously belonged. He wrote:

“An ocean of blood churns
around me-
”Alas! Were these all!
”The future will show
“What more remains
for me to see”.

Sadly, there was little that remained for him to see. He had to prove his neutrality during the First Independence War so as not face persecution from the British, who were now ruthless. Always short of money, he was assisted by the Nawab of Rampur who had been pro-British during the uprising. So to Rampur Ghalib traveled with his ageing wife and two adopted grandsons (he never had any children of his own). But he longed for Delhi and returned to it meeting with accidents along the way. He kept repeating: ” Nothing exists but God”.

Then his claim on fame, “that last infirmity of noble minds” disturbed him. Would he be remembered? He had his doubts. In this dissatisfied mood, he wrote:

”In eternity without beginning,
”My star has reached the
zenith of acceptance;
”But in this world the renown of my verses will be after me.

He died in Delhi and lies buried in what was once the small village of Nizamuddin, now an integral part of New Delhi. His tomb lies close to that of saint Nizamuddin Auliya.

Homage to the great poet
He need not have worried. He underestimated his popularity, for he was applauded while he lived. What the government had withheld, the people of Delhi gave to him in abundance, from their hearts. As we do today, in homage. Ghalib”, the Takhallus (Nome de Plume)”

Selected Ghazals
In Urdu ghazals, along with the love and beauty Ghalib added all the facets of life. Because of him the canvas of Urdu ghazal became very extended.

Since Ghalib was very occupied with Persian , his earlier shers used difficult words and his flights of imagination was such that…

Ghalib was not a philosopher but he questioned things around him.
jub keH tujh bin nahiN
koi maujood
phir yeH hungaamaH
ai kHuda kya hai
[when there is no one besides you; then oh God why is this pandemonium]

One also find naughtiness in his writings, he makes fun of every thing and everybody including himself.
jiss meiN laakhoN baras ki hooreiN hoN
aisi jannat ka kya ka-ray koi
[when the women are million years old what i will do with that paradise]

May 2005
The Relevance of Mahavir’s Values in Modern Times