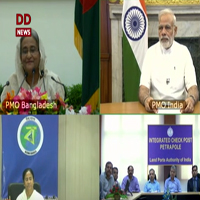 Prime Ministers of the two countries have joined the inauguration ceremony from Dhaka and New Delhi through video-conferencing, while West Bengal Chief Minister Mamata Banerjee joined from Kolkata.

The Integrated Check Post will ease movement of goods and passengers across the border.

The ICP at the Benapole-Petrapole part of the Bangladesh-India border is likely to have all regulatory agencies, including Immigration, Customs and border security.

There will be dedicated terminals for passenger and cargo providing adequate customs and immigration counters, X-ray scanners, and passenger amenities.

India’s second international-standard multi-purpose Integrated Check Post (ICP) and the first along the Bangladesh border opened in November, 2013 at Akhaurah, near Agartala.

The multi-use ICPs have the potential to boost trade and economy between India and Bangladesh and make available various facilities among the trans-border passengers and traders.

The ICPs are sanitised zones with dedicated passenger and cargo terminals and space for regulatory agencies besides necessary modern facilities under oneroof.

Trade and movement of people between Bangladesh and northeastern states are increasing every year and this would further increase by opening of the Benapole-Petrapole ICP.

Post Views: 663
Ram Charan encourages his fans to help make a difference
Cabinet nod to setting up AIIMS in Gorakhpur