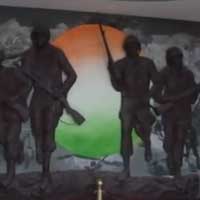 The first-of-its-kind memorial has been constructed by the state government in honour of those who laid down their lives in service to the nation.

According to the detailed plan, it will have light and sound facility to narrate stories of bravery of the nation’s valiant soldiers, who have laid down their lives fighting enemies on the borders.