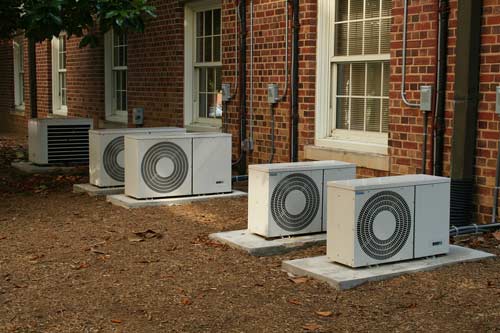 Air conditioning (often referred to as AC, A/C,) is the process of removing heat and moisture from the interior of an occupied space to improve the comfort of occupants.

Air conditioning can be used in both domestic and commercial environments. This process is most commonly used to achieve a more comfortable interior environment, typically for humans and other animals; however, air conditioning is also used to cool and dehumidify rooms filled with heat-producing electronic devices, such as computer servers, power amplifiers, and to display and store some delicate products, such as artwork.

Air conditioners often use a fan to distribute the conditioned air to an occupied space such as a building or a car to improve thermal comfort and indoor air quality.

Electric refrigerant-based AC units range from small units that can cool a small bedroom, which can be carried by a single adult, to massive units installed on the roof of office towers that can cool an entire building.

The cooling is typically achieved through a refrigeration cycle, but sometimes evaporation or free cooling is used. Air conditioning systems can also be made based on desiccants (chemicals which remove moisture from the air). Some AC systems reject or store heat in subterranean pipes.