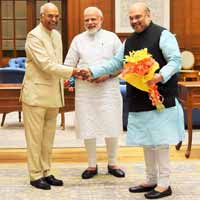 Putting an end to all speculation, BJP President Amit Shah on Monday announced that Bihar Governor Ram Nath Kovind is the NDA’s choice for the next President.
After a nearly an hour-long meeting of the party’s Parliamentary Board at its headquarters in New Delhi, the announcement was made.

PM Narendra Modi, Amit Shah, Sushma Swaraj, Arun Jaitley, Venkaiah Naidu, Thawar Chand Gehlot and other senior BJP leaders were present at the meeting of the party’s top decision-making body where the party approved the candidature of Bihar Governor Ram Nath Kovind for the next President, who hails from a marginalised community.

After the official announcement, PM tweeted, ‘Shri Ram Nath Kovind, a farmer’s son, comes from a humble background. He devoted his life to public service & worked for poor & marginalised.

‘With his illustrious background in the legal arena, Shri Kovind’s knowledge and understanding of the Constitution will benefit the nation. I am sure Shri Ram Nath Kovind will make an exceptional President & continue to be a strong voice for the poor, downtrodden & marginalised.’

Besides NDA allies, the ruling alliance has the backing of TRS and YSR Congress on its Presidential candidate.

While Shiv Sena is keeping its cards close to its chest, Bihar Chief Minister Nitish Kumar from the UPA camp personally met Governor Kovind after the announcement by BJP President.

Nitish’s tone and tenor after the meeting indicated that he may not be averse to Kovind’s candidature.

The Congress response was guarded while BSP extended conditional support to Kovind’s candidature.

Opposition parties would be meeting on 22 June to decide their next course of action but even if they decide to go for a contest, NDA candidate Kovind is likely to sail through easily.

So while NDA has numbers on its side, in keeping with tradition…it has reached out to the opposition in the hope of having a consensus candidate for President.

Kovind is expected to file his nomination before 24 June when PM leaves on a 3-nation tour.