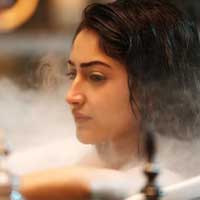 Sayyeshaa, who is all set to make her debut with Ajay Devgn’s ambitious projectShivaay is one helluva professional. The debutant has leaved no stone unturned to put in her best foot forward for her debut film.

One of the scenes required her to shoot in a bathtub. But the challenging part was that the water was ice cold and the actress had to film it without a break. So being the professional that she is, Sayyeshaa took on the challenge and shot for the scene in the cold weather of Manali. The shoot went on for two days and this impressed Ajay Devgn and the rest of the crew.

A source close to the production team reveals, “Sayyeshaa showed volumes of professionalism during the shooting of the song. The scene required her to have bath in cold water in the bathtub and the weather in Manali was freezing. But she shoot the whole scene without complaining even once, leaving all of us overwhelmed!”

The song which has released on 10th October has received a great response from the audience!

Sneak Peek of the Koffee with Karan Season 5 Set!
The documentary film on Walter Rodney