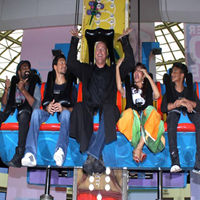 The team of Flying Jatt indeed had a ‘super’ fun trailer launch at Mumbai’s Infiniti Mall in Malad.

While they unveiled the first trailer amidst media in a much dramatic style and even amazed everyone with their antics, the high point was when the lead stars Tiger Shroff, Jacqueline Fernandez, international star Nathan Jones, producer Ekta Kapoor and director Remo D’souza stepped into the mall’s amusement zone – PLANET INFINITI – to enjoy the fun rides with school children.

Looking at the excitement of Flying Jatt team, it appeared they relived their childhood moment! While Jacqueline was seen super thrilled like a kiddo, Nathan stood aside and screamed as the rides started to up the excitement level!

The entire team indeed had a ‘fun n frolicking’ time at the city’s most happening mall!