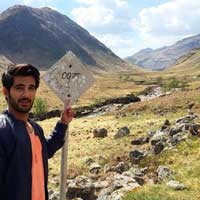 Tum Bin 2 is already creating waves across the country and fans are eagerly awaiting for the film’s release. And now there is something more that all the fans can watch out for in the film.

The quintessential romantic sequence had to have the best location to go along the mood of the film. Although it was a difficult challenge for the makers of the film to create a perfect romantic aura for the film, Anubhav Sinha, the director of the film, while doing the recce, drove for several hours from Glasgow to Glencoe in search of a suitable venue in Scotland.

Coincidentally, he chose the same spot that was used to film a dramatic sequence for Skyfall that starred Daniel Craig and Judi Dench. The scene in Tum Bin 2 features newcomer Aditya Seal, who did not want to miss the opportunity of taking a picture at the iconic spot. The sequence was shot on a bright sunny day with clear skies unlike the one with dreary sky in Skyfall. The popular road is now called the ‘Skyfall road’.

As Anubhav recollects, it was one of the most memorable experience of the entire shoot schedule.

Tum Bin 2, which is jointly produced by Bhushan Kumar and Anubhav Sinha, who has also written & directed the film is set to release on 18th November 2016.