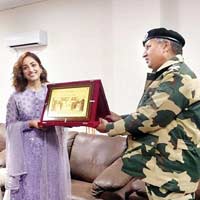 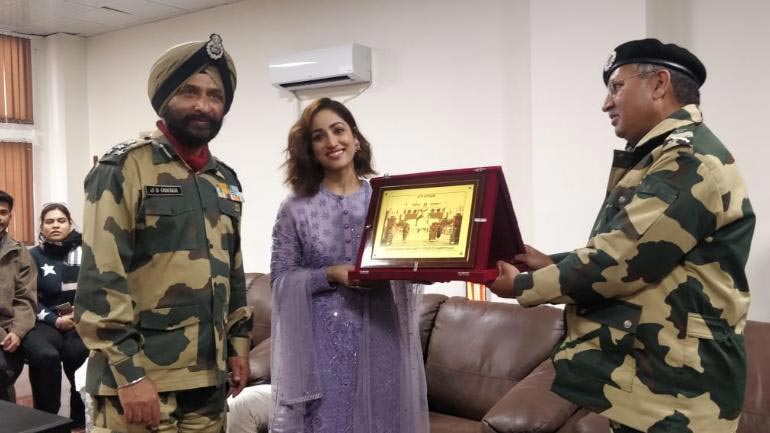 Bollywood actress Yami Gautam, who was last seen in Uri: The Surgical Strike opposite Vicky Kaushal, recently received something more special than just adulation and praise for her performance. The Border Security Force (BSF) in Amritsar felicitated the actress for her performance in the war film.

On the occasion of 70th Republic Day, Yami Gautam along with her co-star Vicky Kaushal visited the Wagah Border in Amritsar. The actors paid a tribute to the BSF Jawans guarding the borders of the country. After the ceremony, Yami was felicitated and given a medallion for her excellent performance in the movie.

Touched by the gesture, Yami said, “BSF is the first line of defence of our country and it gives me immense pride to have met them in person and be in their company. It was kind of them leaving me overwhelmed to have given me this love and to the team.”

“Wherever we have travelled with the film, especially meeting the men who serve our country have showered us with a great deal of appreciation and love. They have been unanimously happy with the essay of those in armed forces and the incredible role they play in our society,” she added.

The film is based on the surgical strikes that were carried out by the Indian Army in September 2016, in retaliation to the terrorist attack on the army camp in Uri. Yami played the role of an intelligence officer in the film. Apart from Yami and Vicky, the film also stars Paresh Rawal, Mohit Raina and Kirti Kulhari.

Uri not just won the audience and critics heart but has become a huge box office success as well. The film that released on January 11 has already cleared the $15 Million mark and is inching closer towards entering the $30 Million club soon.