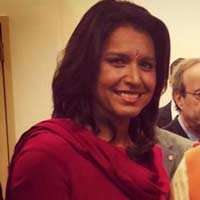 US Presidential aspirant Tulsi Gabbard hits back at Critics, says she is Targeted for being a ‘Hindu’ 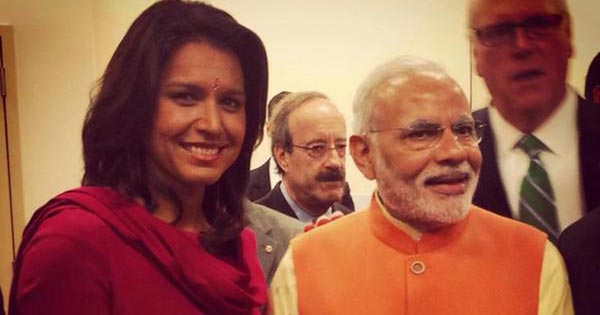 Democratic presidential aspirant Tulsi Gabbard claims that she has been a victim of “religious bigotry” as some media outlets have accused her of being a ‘Hindu nationalist’.

A four-term Democratic congresswoman, 37-year-old Gabbard is the first Hindu elected to the US Congress. In an op-ed published in Religious News Services, she described the campaign against her and her donors as “profiling and targeting of Hindu Americans and ascribing to them motives without any basis.” She further wrote, “Tomorrow will it be Muslim or Jewish Americans? Japanese, Hispanic or African Americans?”

“And, while the headlines covering my announcement could have celebrated this historic first, maybe even informed Americans at large about the world’s third-largest religion, some have instead fomented suspicion, fear and religious bigotry about not only me but also my supporters,” Gabbard wrote.

She further added, “My meetings with Prime Minister Narendra Modi, India’s democratically elected leader, have been highlighted as ‘proof’ of this and portrayed as somehow being out of the ordinary or somehow suspect, even though President (Barack) Obama, Secretary (Hillary) Clinton, President (Donald) Trump and many of my colleagues in Congress have met with and worked with him.”

She also wrote about the past attacks by her political opponents during 2012 and 2014 elections, when they said “that a Hindu should not be allowed to serve in the US Congress and that Hinduism is incompatible with the US Constitution.”

Apart from being a politician, Gabbard has served in the medical unit of the Hawaii Army National Guard in Iraq and in Kuwait. On January 11, the Hawaiian lawmaker announced that she running for the White House in 2020.