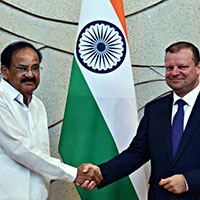 Venkaiah Naidu – Lithuania Can Be An Important Technology Partner 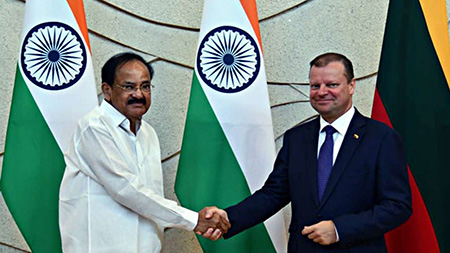 The Vice President is in Vilnius, the capital state of Lithuania in his five day tour of three nations. It also includes Latvia and Estonia. Calling upon the Indian diaspora in the city, Venkaiah Naidu said that the people of India will be very helpful in serving as a bridge in strengthening economic and cultural relations between the two countries.

“The new India’s mantra is ‘Reform, Perform and Transform’, Our youth are driving the digital revolution, powering the start-up ecosystem and pioneering artificial intelligence,” said Naidu.

Venkaiah Naidu also headlined the immense potential for growth in bilateral trade between both the countries. “Lithuania could be an important technology partner for India, especially in the of lasers, renewable energy, agro-food processing and life sciences.”

“Our youth are driving the digital revolution, powering the start-up ecosystem and pioneering artificial intelligence,”. Referring to the 150th anniversary of Mahatma Gandhi, Naidu thanked the Lithuanian government for installing a sculpture of Gandhi and Kallenbach in Rusne as a tribute to their friendship.

Vice President Venkaiah Naidu also praised the Indian community for their active participation in to integrate the cultures of India and Lithuania. He said that the natives are the brand ambassadors of the Indian culture and it’s a matter of pride for them.

ambassadors of the Indian culture