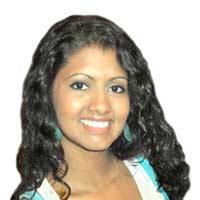 To be a true American is to be patriotic and persevering. A good American citizen understands the constitution and is aware of and protects their rights to free speech, press and religion. “If the freedom of speech is taken away, then dumb and silent we may be led, like sheep to the slaughter,” said George Washington. None value and exert this right more than those who spill their souls onto paper for the whole world to read.

The words I write are a mere extension of who I am. I am an American. I am a Hindu. I am a writer, and every distinguished writer has a raison d’être; a justification for their chosen path, a burning passion that causes their fingers to itch when they are separated from a pen. There is a flare of that cause in every word they inscribe, defining them as a power in their chosen realm. My religious beliefs are the fuel to my printed fire. Without a religion so pervasive and unwavering, my presence in the world of journalism would be invisible. Every story and poem, every news article and review, is underlain by whispers of the timeless wisdom found between the covers of our holy scriptures. My pride in and dedication to my way of life instills in me a deep patriotism no different than the fervor felt by the leaders of this great nation and has made clear my place in the world, my dharma. Dharma instills, above all other lessons, that true happiness and one’s moral duty are inseparable. Because I have learned to be strong, from and for my religion, and have found bliss in doing so, I possess little hesitation in doing the same for the country that has provided me endless opportunity and freedom.

Because no man, bird, tree or stone is exempt from divinity, Hinduism has nurtures a firm sense of respect, humility and understanding. Often, my generation’s constant dissatisfaction with America’s state of affairs, coupled with our desire for rapid change alienates us from this primal sense of gratitude. We fail to realize that by hastily declaring ourselves unfaithful to our leaders and unhappy with our country, we are becoming part of the problem, not the much needed solution. About one year ago, I witnessed a sharp decline in the simplest means of political activity among my peers. Standing for the pledge of allegiance is the smallest, but easiest way to offer support to our nation, and for those who are not of voting age and cannot do much more to help this country, I wondered if it was really too much to ask. I delivered a furious tirade to my peers via the school newspaper, scolding, “If you do not stand for the pledge of allegiance, you do not stand for this country. And if you do not stand for the very soil you live on, then what do you stand for?” I was Krishna, demanding no less than everything from Arjuna. I was a Hindu demanding selfless service from those who failed to realize their Dharma, calling my peers to their simplest of obligations. It is essential that one’s duty is fulfilled without hesitation or expectation; it by this fundamental Hindu ideal that I live.

The ideals that govern the way I live my everyday exist in beautiful mutualism. A true American will proudly claim their way of life in the face of adversity and will not accept an offense without making an endeavor to correct it. My way of life is so often affronted by misconceptions and myths, and the perpetrators of these falsehoods have unknowingly motivated me to do the American thing- defend my rights. After years of enduring a wild, savage portrayal of India and my religion in school, I finally complained. The entire world listened via an editorial in Hinduism Today. When I witnessed an image of God being defiled and subjected to the whims of commercialism as a marketing tool to sell mere hamburgers, I did not look away. I wrote to the CEO of Burger King, asserting the right to protect my religion. When asked to identify and research a controversial topic for a term paper, I chose an issue that resounded loudly within me- the plague of conversion in India under the guise of humanitarian aid. When asked to write an opinions piece on the possibility of vegetarian school lunches, I made a clear stand in the Sun Sentinel Teenlink on the right to religious practices guaranteed to every American student, including vegetarianism. The instances go on; the influence Hinduism has had on my role as proud citizen of this nation is clearly steadfast.

The depths of my soul are expressed through my written words, and with each that I inscribe, I strive to inspire and move, and Hinduism has created a niche within the scholastic world for me to exert my right to speak freely. Similar to a force of nature, printed words possess a power that can shake and move the foundation of any empire and cannot be stopped by any man or nation; it is by this fundamental American ideal that I live. I am fearless and strong on paper. I never waver in my dedication to my spiritual life, and Hinduism gives me reason to be American. If my fire is of the West, the wood sustaining the flames is forever imported from the East.

Faren Rajkumar is a 17-year-old female currently residing in Plantation, Florida. She is a senior at South Plantation High and editor-in-chief of the school newspaper. She is an avid writer, photographer and journalist, currently a staff member for the Sun Sentinel Teenlink and a Cappies theater critic. She recently attended the Journalism Institute at the University of Florida, and in addition to her love for prose, she is a classically trained violinist. Faren hopes to freelance and write fiction while pursuing a career in medicine.

Categories: Faren Rajkumar, Get to Know