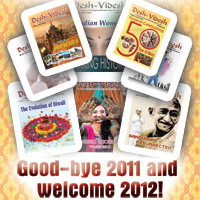 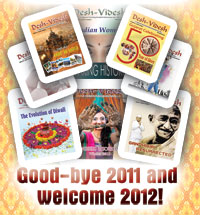 2011 has been a very exciting year for Desh Videsh Media Group. During the last 18 years, we have crossed major milestones and embarked on new territories while always keeping our traditions to heart. A wide variety of subjects and topics have been covered in Desh-Videsh, and a special emphasis has been placed on the community.

Let’s take a look at some exciting events from 2011.

Best of the Best Indians
It is always to refreshing to discuss successful individuals from the Indian subcontinent. In the June 2011 issue of Desh-Videsh, we focused on the best of the best Indians living in America, including the many accomplishments of Indian American youth. Though labeled as labeled ABCD (American Born Confused Desi) or FOB (Fresh of the Boat), we strongly believe it is time to rethink the way we think about our youth.

A local South Florida youth, Faren Rajkumar, winner of the Hindu American Foundation (HAF) essay winner, is making a difference in her own way. Besides her hard work, her parents have played an equally important role in her success. Fareida and Vishva actively participate in activities like attending Bal Vihar at the South Florida Hindu Temple, helping in Ekal Vidyalay, or going to Youth Camp. Parent involvement is the best, if not only way, of raising kids who embrace our culture and heritage and at the same time excel in their studies.
The January 2011 issue featured an article about some of the most successful Indian women in the word. The list included Indian women from business to politics to music, and each woman has worked very hard to meet major milestones in her field. Six Indian women have made the Financial Times Top 50 Women in Business list, and Former Prime Minister Indira Gandhi’s name can be seen in Time’s 25 Women of the Century list.

Another successful Indian gracing the pages of Desh-Videsh is Sachin Tendulkar, a legendary cricket player who has broken and made several records during the history of this sport. He recently added another first to his list – he is the first batsman to make 50 centuries in world cricket test matches. So far no batsman has even come close.

Though religious and spiritual leader Shri Daya Mata is not Indian by birth, the ways in which she has adapted the Hindu religion, Indian culture and Indian philosophy make her more Indian than some of the Indians I know, many of whom are Indian by birth and not through actions. Shri Daya Mata, Mother of compassion, led the Self Realization Fellowship for 55 years, an organization which was founded by Paramhansa Yogananda, who is also the author of the world classic, Autobiography of a Yogi. 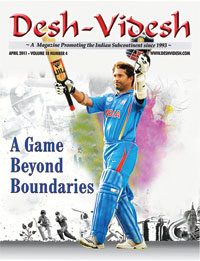 Cricket
In April 2011, we covered the ICC World Cup Tournament, hosted by India and won by India. The way the team played in the last three matches in ICC world Cup, first against Australian team, then Pakistan team and finally against Sri Lankan team, shows they are truly the best cricket team in the world. Imagine the excitement and pride when the Indian team won! Watching all the players including Dhoni give full credit to Sachin Tendulkar, and witnessing them carry him on their shoulders all over the field gave me goose bumps. Unfortunately he did not score very well in the final against the Sri Lankan team, but still the team credited him for the victory. The players’ modesty demonstrates the type of gesture from centuries old Indian culture. Qualities like nonviolence, modesty, team effort and lack of ego are those that our forefathers wanted us to carry on for all time.

Books
In our book review section, we reviewed The Conscious Parent by Dr. Shefali Tsabary. She did a wonderful job in providing step-by-step guidance on how to raise a child in a changing environment, thus making a difficult job easy. One of her reviewers, Cynthia, writes, “If you’re seeking quick and easy ways to change your children’s behavior, or get them to do what you say, this book is not for you. Becoming a conscious parent requires looking deeply and honestly within oneself, delving into one’s own fears and shortcomings.” Since Dr. Tsabary’s approach to raising children involves compassion and spiritual development, it is of no surprise that His Holiness the Dalai Lama wrote the book’s Preface.

Health
In February, Healthy Heart month we covered health related articles. The occurrence of heart disease among Indians and Indian Americans is rising. Yes, some of the research indicates that it is in our genes, but our lifestyles are also much to blame, as Dr. Nathan points out in his article.


Gandhiji
As a lifelong admirer of Gandhiji, we covered news about the illustrious leader in several issues. I feel very proud to know that his philosophy recently termed “Gandhigiri” is still alive. As seen in the recent Anna Hazare case, his philosophy is alive in India despite the fact that the rest of the world sometimes violence as a path to solving problems. In one article, we discussed the similarities between Gandhiji and modern day Gandhi-like figure, Anna Hazare. Over sixty years ago, Gandhiji brought about a revolution in India, and now Anna Hazare repeats history. While Gandhiji helped liberate us from British rule, Anna Hazre now helps liberate us from corruption caused by our own people.

Charity
We are equally concerned about protecting our youth, both in the US and in India. Madhu Sridhar, the president and CEO of Akshaya Patra Foundation USA, has taken on the remarkable project of feeding underprivileged children each day in schools across India. Presently, her organization feeds more than 1.2 million children in India at a cost of $28 per child for an entire year. She is yet another Indian American making a mark in a field where not too many Indians have gone. 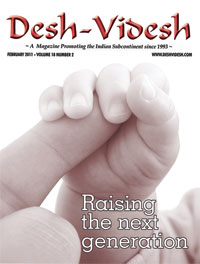 India, one of my most favorite places to visit, was the cover story of one of the issues. Though we publish articles on travel to India often, our writers always manage to come up with new and exciting places to explore in India.
The September 2011 issue focused on a prosperous state in India, Gujarat. In two separate articles, we discuss just how far Gujarat has come over the last 50 years as well as one main component of this progress – Sanad, the motor city of India. After Tata Motors faced difficulties in building the Nano Factory in Bengal, Narendra Modi, Chief Minister of Gujarat, welcomed Ratan Tata from Tata Motors with open arms. Once the Nano car was built in Sanand, Gujarat, several other car manufacturers and related auto industry manufacturers decided to build their plants in Gujarat.

Festival of India
In the Diwali issue, we discussed how Diwali celebrations have evolved over time. In some aspects, the true meaning of Diwali has become lost, and in other aspects, celebrations continue full force. As I have mentioned before, I am continually impressed by our young generation Indians, those who were born and raised in the United States or have migrated from India in the last five to ten years. In so many ways, this generation has far exceeded the accomplishments of my generation.