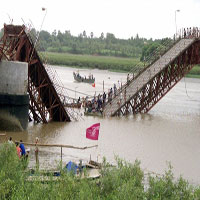 Two bodies have been recovered in the Mumbai-Goa Highway bridge collapse incident.

Several vehicles were feared to have been swept away in the Savitri River in Konkan region as a bridge at Mahad on the Mumbai-Goa Highway collapsed late last night.

The incident brought traffic to a halt. Two buses are missing and a few other vehicles are feared to have been swept away.

NDRF teams have been rushed to the spot immediately.

There were two parallel bridges — one is a new bridge and the other one constructed during the British era.

The old one had collapsed.

The primary reason seems to be the high pressure caused due to flooding of river Savitri due to heavy rains in catchment of Mahabaleshwar.

The issue was also raised in Lok Sabha.