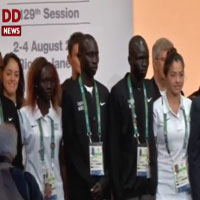 The 10 members of the first Refugee Olympic Team were welcomed by the International Olympic Committee in Rio de Janeiro on Tuesday.

The athletes were introduced to the gathered delegates, before each of them shook hands with IOC President Thomas Bach.

Rio’s Olympics open this Friday and run until August 21 and are the first to include a team entirely of refugees.

The team includes 10 athletes from four countries all of whom will compete under the Olympic flag.