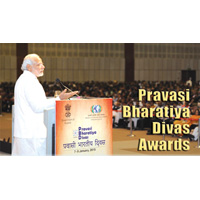 Those who leave the comforts of home to conquer new challenges across the globe have a true adventurous spirit. To honor the exceptional and meritorious contributions of Indians living overseas as well as recognize their role in India’s growth, the Ministry of Overseas Indian Affairs constituted the annual Pravasi Bharatiya Sammaan Awards.

During the 13th Pravasi Bharatiya Divas celebrated on January 11, 2015, fifteen prominent NRIs received the award for their contributions in various fields. Among these were Mala Mehta, who received the award for establishing an “Indo-Australian Bal Bharatiya Vidyalaya” in Sydney and for pursuing the growth of Hindi in Australia; Donald Rabindernauth Ramaotar, the President of Guyana; Dr. Rajaram Sanjaya for developing 480 varieties of wheat that have been released in 51 countries; New Zealand Member of Parliament Kanwaljit Singh Bakhshi; Duraikannu Karunakaram, the Justice of the Supreme Court of Republic of Seychelles; Essop Goolam Pahad, minister in the presidency from 1999 to 2008 in South Africa; Ashraf Palakunnumal, Malayalee Social Activist in United Arab Emirates; Mahendra Nanji Mehta, a Uganda-based businessman; Professor Nathu Ram Puri, founder of Purico; Raj Loomba, a philanthropist and founder of Rinku Group; Satyanarayan Nadella, CEO of Microsoft; Dr. Kamlesh Lulla, NASA scientist; Dr. Nandini Tandon, Silicon Valley investor; Rajmal Parakh from Oman; and Shah Bharatkumar Jayantilal.

Satyanarayan Nadella, CEO of Microsoft
Satyanarayan Nadella, a life-long learner, cricket fan, and poet, was born in 1967 in Hyderabad, India to a Telegu Kamma family. He attended public schools there and received a bachelors’ degree in electrical engineering from Manipal University.

Subsequently, he traveled to the United States to pursue a graduate degree at the University of Wisconsin, and he later received an MBA from the University of Chicago. Before becoming the CEO of Microsoft, he was the Executive Vice President of Microsoft’s Cloud and Enterprise group and was responsible for running and developing its Computing Platforms, Cloud Computing Services, and Developer Tools.

He came to Microsoft, he told employees in an email, “for the same reason I think most people join Microsoft to change the world through technology that empowers people to do amazing things. Many companies aspire to change the world. But very few have all the elements required: talent, resources and perseverance. Microsoft has proven that it has all three in abundance.”

Growing up in Hyderabad and playing cricket on his school’s team, he calls cricket his passion. “I think playing cricket taught me more about working in teams and leadership that has stayed with me throughout my career,” he said. He also enjoys watching Test cricket, “which is the longest form of any sport in the world,” with games that can go for days and days. “I love it,” he says. “There’s so many subplots in it, it’s like reading a Russian novel.”

Nadella relaxes by reading all forms of poetry by Indian and American poets. “You’re trying to take something that can be described in many, many sentences and pages of prose, but you can convert it into a couple lines of poetry and you still get the essence, so it’s that compression. The best code is poetry.”

Married for 22 years to his high school sweetheart, Nadella and his family live in Bellevue, Washington.

Dr. Kamlesh Lulla, NASA Scientist
Growing up in Vadodara, Gujarat, India, Dr.Kamlesh Lulla, a distinguished Gujarati NASA scientist, was encouraged to pursue a career in space science after hearing a radio broadcast of the Apollo 11 lunar landing and Neil Armstrong’s historic first steps on the moon in 1969. In 1968, Dr. Lulla attended the M.S. University of Baroda, and earned bachelor’s degrees in biology and chemistry. He pursued a master’s and doctorate degree program in environmental science and ecology and received his first PhD degree in 1976.

Dr.Kamlesh Lulla trained astronauts like Kalpana Chawla and Sunita Pandya Williams. He is currently the chief scientist for Earth observation in the Human Exploration Science office at the Johnson Space Center at NASA. He is the force behind the concept of “Earth Smart Training,” which has helped capture captivating photos of the Earth from outer space.

Dr. Lulla, who can converse in seven of India’s fourteen major languages, maintains strong ties to his Indian heritage and credits his success to his personal and professional life. “My Indian-American heritage values that contributed to my career success: value of high-level education (two Ph.D. degrees); dedication to family and profession; integrity; respect for others; and hard work,” Dr. Lulla said.

While receiving this special award, Dr Lulla said, “Being a native of the state, it is a special feeling getting recognition here. While I have been working in the US for more than 25 years, there is no feeling like coming home.”

Dr. Nandini Tandon, Silicon Valley Investor
Dr. Nandini Tandon has mesmerized the world with her exceptional work in the field of healthcare and IT. She is also an ace venture capitalist and has helped build various companies in pharmaceutical, medical devices, diagnostics, and biotechnology sector right from research to commercialization. Dr. Tandon has served on the boards of more than a dozen private new technology companies in biotechnology and medical technology. and is currently on the board of U-Systems.

Dr. Tandon spent a decade as a venture capitalist and another decade helping build companies in the biotechnology, diagnostics, medical devices, pharmaceutical and semiconductor industries across various stages of development, from research to commercialization.

Dr. Tandon, her sister Priya Tandon, and Dr. B. R. Shetty, based in Abu Dhabi started SVADESH (Silicon Valley and Avadh’s Development for Entrepreneurial Services for Humanity) an investment initiative by NRIs in India. Investing in India is like a “homecoming” for the Tandon sisters. “Our mother wanted us to make a similar hospital in UP,” said Dr. Nandini Tandon.

The Tandon sisters are set to invest more than a billion dollar in Uttar Pradesh to develop a “teaching hospital,” and integrated healthcare system. “The eye hospital in Sitapur was set up by our great grandfather. My father is from Agra and we have relatives and friends across UP,” said Dr Nandini.

Mr. Mehta joined the family business in 1950 at the age of 18, and later took charge of all the Group’s African companies. In 1980, after Amin was removed from power, Mr. Mehta was invited back to Uganda by the government, which restored all of his assets. After many setbacks, Mehta Group now has a global presence that stretches from India to East Africa, the UK and North America, with an employee base of 11,000 and assets worth around $400 million. The flagship company of the group in East Africa is Sugar Corporation of Uganda Ltd (SCOUL), while other companies based in Uganda include Cable Corporation Ltd (CCL), Trans Africa Assurance Ltd, Trans Africa Commerce Ltd, and Uganda Hortech Ltd.

Donald Rabindernauth Ramotar, President of Guyana
Donald Rabindernauth Ramotar was born in a village of Caria Caria on the Essequibo River to Ms Olive Constantine and Mr Sam Ramotar, a timber grant operator. He graduated with a degree in Economics from the University of Ghana and later he joined the People’s Progressive Party (PPP). Now, he is the President of Guyana since December 2011.