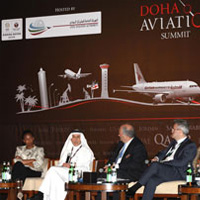 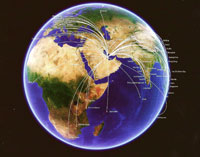 Qatar Airways, the national carrier of the State of Qatar, is currently undergoing rapid expansion, which includes new service destinations within India. With one of the youngest fleets in the world and an aggressive expansion strategy, the airline is poised to make a mark on the industry.

In a short span of time, Qatar Airways has been able to expand to over 100 destinations worldwide, and the airline credits this to fleet management. New aircraft are inducted into the fleet every 18 days (on average), which allows Qatar Airways to aggressively launch new routes. The airline is particularly committed to serving smaller cities and underserved markets, such as Ahmedabad. 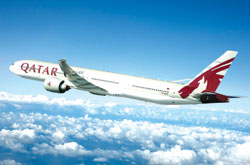 As the Gulf region’s only Five Star-ranked airline to serve Ahmedabad, the airline has already garnered a following of dedicated travelers. Currently, Qatar Airways operates up to 95 flights a week across 12 destinations in India, with Kolkata being the newest destination beginning July 27. With a cabin crew comprised over 150 nationalities, the airline is able to ensure a mixed crew on every flight, including some members who speak the native language of the destination being served. This, in conjunction with several menu options, including vegetarian and kid-friendly, passengers traveling to India can rest assured that their needs are covered.

Qatar Airways currently provides service to 12 destinations in India:
Ahmedabad, Amritsar, Bangalore
Chennai, Delhi, Goa, Hyderabad
Kochi, Kolkata, Kozhikode, Mumbai, Trivandrum
Currently, Qatar Airways serves India-bound passengers from the Americas via connecting points across the United States, Canada, and South America. The airline flies daily from Houston, Washington, and New York, and three times a week from Montreal, Canada. All flights operate via Doha, Qatar, the airline’s operational hub.
To keep pace with the airline’s rapid growth and capacity to offer new destinations, $1 billion has been invested to support infrastructure improvements at the Doha International Airport. The new airport and addition of new aircraft to the fleet with allow Qatar Airways to serve over 120 destinations by 2013, one year after the new airport is scheduled to open.

With a reputation for stellar onboard service, an emphasis on underserved markets, and a young fleet, Qatar Airways is an exceptional option for passengers exploring opportunities to travel to destinations not only in India, but also across Europe, the Middle East, and Africa.

Qatar Airways was named “2011 Airline of the Year” for its outstanding inflight product and operational excellence.