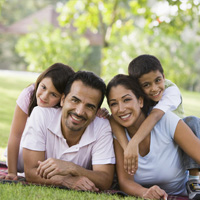 Child psychologist and co-author Alvin Rosenfield of The Over- Scheduled Child: Avoiding the Hyper-Parenting Trap, has cited one study indicating that unstructured children’s activities have declined by 50 percent over the past 20 years, family dinners have declined by 33 percent, and family vacations have decreased by 28 percent. Family lifestyles are being sacrificed as the pace of life continues to increase and much of the western world continues to gain in prosperity; people are working harder and moving faster. Additionally, the demands of school and community have left little time for family. Though this concept seems quaint in the minds of working families, rich or poor, its importance is becoming more apparent as the rates of childhood depression, drug use, obesity and a myriad of personal issues have taken root in the psyche of our children. As a result, sociologists, psychologists 66 JULY 2007 • WWW.DESHVIDESH.COM and other researchers have begun to critically look at the family unit and the association between family time and outcomes in children.

Often, allocating time to ensure proper communication within the family is postponed and neglected due to time constraints. So where does this leave us? Imagine if everyone in your household could come to a consensus on a time where for thirty minutes family members sat with each other to share, laugh and play.

One solution can be found in the Hindu faith. As with many Hindu traditions, ancient wisdom serves not only to guide individuals on the spiritual path, but also provides practical solutions to many of life’s problems. A Sanskrit verse from the Katho Upanishad states Om Sahanavavatu, sahanau bhunaktu. The meaning is insightful: a family shall eat together, play together and work together. Only then will peace flow within the family. In practice, this can be done through Ghar Sabha.

Ghar Sabha, whose literal meaning is Home Assembly, is a time where discussion about everyone’s day, good and bad moments, concerns and future plans can occur and everyone can learn to understand one another better. Ghar sabha also incorporates spiritual activities such as singing hymns praising God, listening to lesson from scriptures and learning how to engage spirituality in everyday life, all while spending time together.

Ghar Sabha should preferably be held in the evening for approximately 20-30 minutes. Many different activities can be done by the family during this time. As a change, many families now watch cultural videos, such as the Ramayan. Later, families discuss the meaning behind events in the film. Children in the Ghar Sabha can learn much. Not only can they gain insight into their culture, but also by having children actively take part in reading, singing, or playing instruments, they enhance their skills. Through this daily activity, family members develop a better understanding of each other’s social, physical, emotional, and spiritual needs.

The BAPS Swaminarayan Sanstha (BAPS) has promoted the introduction of Ghar Sabha. Just as BAPS promotes these values in the home, it also promotes these values through its various activities. Through Family Seminars and Child-Rearing Seminars, many gain a clearer idea of how to successfully fulfill their roles as parents and gain valuable insight and inspiration from other families. One among its many activities includes Parent Conferences where workshops on conducting Ghar Sabha are held. Pramukh Swami Maharaj, the present spiritual and organizational leader of BAPS, has consistently advocated for Ghar Sabha. It is the cornerstone of family unity and strength. It is also a practical tool to develop not only familial peace, but also, personal peace.

In 2005 a youth in London, England faced one of the hardest times in her life, as her father passed away. The young girl and her mother began to routinely do Ghar Sabha soon after. She remarks on the significant difference it has made in her life by saying, “I have found peace within myself, having just lost my father. I have come to understand religious values, such as respect and honesty and its applications in everyday life.” Her mother concurs by saying, “I have learned to better understand the generation to which my daughter belongs to by engaging in educational and recreational activities. As such, I have been able to relate to my daughter and become closer to God.”

An East Indian business man in Kenya was in great despair; his 25- year-old daughter’s engagement was called off; his son just had lost his job; and his businesses were not performing well. The situations caused much strife between family members and had been going on for nearly a year. The business man and his wife met an old friend who frequently attended BAPS services, and invited the couple over for his family’s Ghar Sabha. This inspired the business man and his family to do Ghar Sabha. Many family disputes were resolved, their finances came into order, but most importantly, their broken faith was rebuilt and grew stronger. By conducting the Ghar Sabha, peace now prevails in the home.

The past cannot be altered, and the future is unknown, which leaves us with the present, where all your actions leave lasting impressions in the minds of your child. Whether it is playing with your children, listening to each other, or eating together, family times are precious moments that can be cherished from one generation to the next. Though we may find ourselves constrained for time, there is no time other than the present to make a positive change in our lives.

In order to fortify the Ghar Sabha, one needs to supplement the regiment with regular trips to the Mandir. To cater to the needs of the individual, family, and community, Hindu scriptures and traditions have prescribed the building of Mandirs. Through the guidance of Pramukh Swami Maharaj, a Shikharbaddah Mandir, a traditional Hindu Mandir, made totally from hand-carved marble, limestone, and sandstone, is being built by BAPS in Lilburn, GA. This beautiful masterpiece of ancient art and architecture will be adjoined by a Family Activity Center providing facilities for cultural, social and spiritual activities in order to serve the community by promoting Children and Youth Development, Family Unity, Cultural Heritage, Humanitarian Services, and Spirituality. A gift to the community presented August 26th.