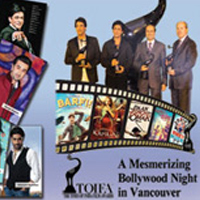 A Mesmerizing bollywood Night In Vancouver

Glitz and glam hit a high point in Vancouver in April with LuxCozi’s Times of India Film Awards (TOIFA). The first ever LuxCozi Times of India Film Awards launched perfectly in the year when Hindi Cinema completes 100 years of existence. The three-day bollywoodextravaganza took place in the coastal city of Vancouver, British Columbia, to honor excellence in Hindi Cinema and bring Canadian fans closer to the world’s most loved film industry. The three-day affair in Vancouver left fans electrified with stunning performances, music and fashion.

Tribute to 100 Years of bollywood
The second day at TOIFA Vancouver, marked the celebration of 100 years of bollywood. A special fashion show by Manish Malhotra marked a tribute to the excellence and splendor of the Hindi film industry. Models displayed modern versions of those worn throughout the ages. This was also a night to celebrate the people behind the screens in Hindi films, the technicians. Multi-talented Karan Johar and the sultry Chitrangda Singh hosted the technical awards.

TOIFA Begins on a Musical Note
The event began on April 4 with a musical night at the Pacific Coliseum. The inaugural event began with a performance from the bravura choreographer and singer Shiamak Davar. Mohit Chauhan, Sunidhi Chauhan and Hard Kaurraised the excitement level even higher on the first day. As celebs and fans flew in from different parts of the country, the anticipation continued to build.
Grand Finale
The last day of LuxCozi TOIFA culminated in the most awaited night of all, Grand Awards Night. The crowd went berserk with the hosts for the night, charismatic Ranbir Kapoor, stunning Anushka Sharma and the superbly talented Boman Irani. The host and entertainer Ranbir Kapoor also happened to receive the Best Actor Award– Male for his much-acclaimed work in the movie Barfi. The same movie that touched millions of hearts also won the Best Film Award – Popular. Not surprisingly though.

Best Actor Award – Female was garnered by the gorgeous and talented Priyanka Chopra for Barfi, an honor she dedicated to her father. This also happens to be one her most prized memories after her father’s sad demise.

The event sizzled with spectacular performances by bollywoodsuperstars, who brought the house down with their ‘latkas’ and ‘jhatkas.’ Abhishek Bachchan enthralled the audience with his entry on a chariot through the screaming crowd. bollywood’s sexiest sirens Priyanka Chopra and Katrina Kaif set the stage on fire with their blazing performances on tunes like “Desi Girl” and “Chikni Chameli.” Priyanka Chopra dedicated her performance to women power. bollywooddiva Aishwarya Rai Bachchan gave an electrifying performance to the tunes “Khwaja Mere Khwaja,” “Taal,” “Devdas,” and “Dhoom 2. ”The act was special because it was her first stage performance after childbirth.