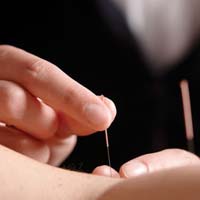 Acupuncture as effective as drugs for pain relief: study

Acupuncture may be a safe and effective alternative to painkillers in providing long-term relief for patients with severe pain, a study suggests.

Researchers from RMIT University in Australia conducted a trial in the emergency departments of four hospitals involving about 528 patients with acute low back pain, migraine or ankle sprains.

Acupuncture is a form of alternative medicine in which thin needles are inserted into the body. It is a key component of traditional Chinese medicine. Patients who identified their level of pain as at least four on a 10-point scale randomly received one of three types of treatment – acupuncture alone, acupuncture plus pharmacotherapy (treatment using drugs) or pharmacotherapy alone.

Researchers noted that one hour after treatment, less than 40 per cent of patients across all three groups felt any significant pain reduction, while more than 80 per cent continued to have a pain rating of at least four.

“Our study has shown acupuncture is a viable alternative, and would be especially beneficial for patients who are unable to take standard pain-relieving drugs because of other medical conditions,” said Marc Cohen, professor at RMIT University.

While acupuncture is widely used by practitioners in community settings for treating pain, it is rarely used in hospital emergency departments, researchers said. “We need to determine the conditions that are most responsive to acupuncture, the feasibility of including the treatment in emergency settings, and the training needed for doctors or allied health personnel,” Cohen said.

The study was published in the Medical Journal of Australia.