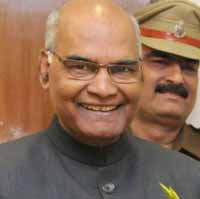 Who is Ram Nath Kovind?

Bihar Governor Ram Nath Kovind has a deep understanding of law and the Constitution, which should stand him in good stead should he be elected the next President. Here’s more about NDA’s Presidential candidate.

He doesn’t need an introduction, his comments do not court controversy.

Born in Kanpur, this Dalit leader, is known for his organisational skills. Kovind, a commerce graduate who also studied law at Kanpur University, practised in the Delhi High Court and the Supreme Court.

He was also the Central government’s standing counsel in the apex court from 1980-93. He is known as a crusader for the rights and cause of weaker sections of society right from his student days.

As an advocate, Kovind took the lead in providing free legal aid to weaker sections, especially the SC/ST women, poor and needy girls under the aegis of the Free Legal Aid Society in Delhi.

Kovind, headed Dalit Morcha from 1998 to 2002 AND also led the All-India Koli Samaj. He joined a stir by SC/ST employees in 1997 when Dalits and others protested against orders issued by the Central government, which were rescinded by Atal Bihari Vajpayee when the NDA came to power.

Known for his work in the field of education, he served as a member on the board of management of Dr BR Ambedkar University, Lucknow, and was a member of the board of governors of the Indian Institute of Management, Kolkata. He was Elected to Rajya Sabha in April 1994 from Uttar Pradesh, he served two consecutive terms till March 2006.

During his parliamentary tenure of 12 years, Kovind emphasized on the development of basic infrastructure for education in rural areas by helping in construction of school buildings in Uttar Pradesh and Uttrakhand under MPLAD scheme.