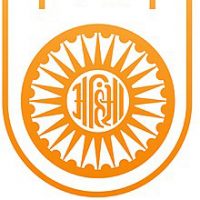 In the November 2020 issue of Desh-Videsh, we published the article written by Chaitanya ji titled “Addressing and Overcoming Enemies Within You.” It was the first of a multi-part series of articles. In this issue, we feature the second part of this series, “Ahimsaa.” Most will recognize it as one of the most important principles Gandhiji followed throughout his life. As we remember Gandhi ji on this Punya Tithi, we pay respect to this principle.

TThe word ahimsaa means non-injury. We understand it as a Universal value, saamaanya dharma. No human being wants to be hurt by another in any manner. In fact this is true for any living being. We thus have a natural tendency to seek to be free from being hurt.

The practice of ahimsaa as a discipline is mandated in the Vedic statement himsaam na kuryaat – do not cause injury. Dharma Shaastra, which are the codes of ethics and conduct we are advised to live by says ahimsaa paramo dharmah, non injury, is the foremost value. It is also the first value identified among the several listed in Patanjali’s Yoga sutras. In this work he defines ahimsaa as vaanmanahkaayaih bhootaanaam anabhidrohah – not hurting or bearing malice to any being by speech, mind or action.

We can be hurt by someone or hurt another physically by causing pain or injury. Others can be hurt directly or indirectly such as by stealing, cheating, exploitation and so on.

Use of hurtful speech, which may or may not be deliberate also is meant to and does cause pain to another. It may be born of anger or used as a means to punish, exercise control, subjugate or coerce another individual. Many times the pain caused by speech far outlasts the pain caused by physical himsaa, injury.

The most common response to being hurt is to immediately retaliate. This results in a domino effect and breeds ill feelings. Reacting impulsively is more often than not, unproductive. It takes considerable effort to be deliberate in one’s actions. It may be acceptable to hurt another in self-defense when one’s own well being is threatened and imminent but to do so in order to cause pain to another is wrong. One can also cause hurt by the mind by entertaining

hurtful thoughts and bearing malice towards another. What is cultivated in one’s mind often becomes the potential which manifests in the form of verbal or physical action. Additionally it does not help the person who entertains such thoughts either. A mind consumed with anger and vengeance is not a mind that is relaxed or at peace.

Ahimsaa as a spiritual discipline is remarkably seen in the Jain and Buddhist monastic order. Jain monks avoid eating after sunset to prevent accidentally hurting tiny creatures that appear at dusk. In all actions including walking, talking, Jain monks make a conscious effort to avoid hurting even the smallest organisms. They cover their mouths with a piece of cloth, may sweep the ground they walk on and so on being careful not to hurt any living being including plant life. Hindu sanyaasis take a vow called ‘abhaya pradaanam’ whereby they declare to all living beings that henceforth they need not be afraid of being hurt by the sanyaasi.

Vegetarianism as a spiritual discipline of ahimsaa

Whether one grows up in an environment where one is accustomed to eating only a plant-based diet or a combination of plant and animal-based diet, there are many individuals who make a deliberate choice to live only on a plant-based diet.

Why is there more himsaa involved in eating an egg than an eggplant, or a chicken more than a pumpkin? All living beings require food to survive. And life depends on life! Organic life lives upon organic matter. One form of life lives upon another form of life. What is dinner for the hunter is a tragic end for the hunted. The eater survives at the expense of the eaten. This being the case why is it not acceptable for humans to eat other animal forms of life?
The key to understanding this value lies in understanding that what a human being consumes in order to live is a matter of choice, an exercise of free will. A human being is not in the same category as a canary eating cat, born with and living by an instinct to eat what it is programmed to eat. Not being programmed a human being is endowed with the privilege to choose the kind of food he eats.

All living beings have a value for life. In fact survival is a basic instinct. Anything alive tries desperately to stay alive, plants and the simplest forms of life included. However, it is also plain that all living beings do not appear to have the same level of self awareness. Creatures in the animal kingdom are closer to human beings than are plants. Animals, birds, aquatic animals all run away attempting to escape when they sense someone trying to catch or harm them. When they are caught, they cry out, struggle, try to escape the first chance they get and fight desperately to not be killed. Thus, it is quite obvious that they do not want to be hurt, much less be killed.

Since a human being is given the free will to choose his food, he must do so based on some norms that guide his choice. This may be based on taste, upbringing, environment, availability of food, affordability and so on. The gift of 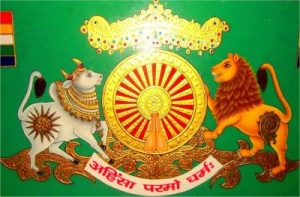 free will carries with it the responsibility to follow a norm of Dharma for one’s choices. If one has to make a choice of food the preference is for a form of life that is the least evolved, namely plant life. Additionally, consuming vegetables and fruits does not destroy the plant or tree. This is not the case in consuming animals wherein the whole animal’s life is taken. A life that is as dear to the animal as it is to the person who consumes the animal. It is difficult to do this if one truly recognizes the sanctity of life and how precious it is. For one who makes a decision based on their personal free will to respect the sanctity of life and right of living beings to live out their lives as determined by their own will and or as nature intended ahimsaa in the form of vegetarianism becomes a religious discipline.

The value of ahimsaa requires alertness in all areas of one’s life. It finds expression in one’s attitude and relationship towards plants, animals and humans. In living this value, one develops finer appreciation of the feelings of others. One comes to see beyond one’s own needs to the needs of others and treats all beings with sensitivity and appreciation. All these characteristics lead to maturity and spiritual growth in an individual. 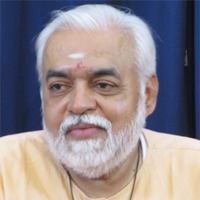 Sri Dhira Chaitanya , also known as Dr. Sundar Ramaswamy, is a teacher of Vedanta as well as a board certified doctor in child psychiatry. He currently conducts classes in South Florida. He is the co-author of Purna Vidya, a twelve year program for teaching children in Hindu Tradition and culture. He has also written Bereavement and Final Samskara in Hindu Tradition. His unique background allows him to teach about Hindu scripture while also addressing the role of psychological growth and maturity in spiritual pursuit with insight and authority.

Gandhi’s Thoughts on Ahimsa
It is an irony that Gandhi ji, one of the biggest promoters of ahimsa (non-violence) in the world was killed by a violent Hindu fanatic. It was a cold blooded murder while Gandhi ji was heading for peace prayer.
Let me pay my humble tribute to Gandhi ji by presenting his thoughts on ahimsa.