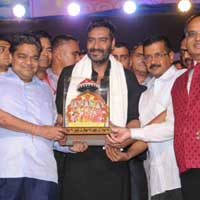 As the Navratri festival culminated with Dussehra recently, the actor film maker shot a fiery arrow to set ablaze the effigy of Raavan.

A crowd of more than 1 lakh 50 thousand people was present at the venue to witness this. Ajay Devgn, who is gearing up for his next release Shivaay, was delighted to be present there!