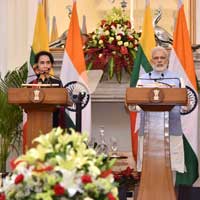 India and Myanmar have agreed for close security coordination in border areas keeping in view the sensitivity of each other’s strategic interests.

Myanmar State Counsellor Aung San Suu Kyi said that her country has suffered a lot for lack of peace and stability and Indian democracy has always been a source of inspiration for Myanmar.

Aung San Suu Kyi said that deepening friendship between the neighbours would play an important role in peace and stability in the region.