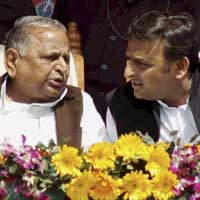 Amid a raging family feud timed to election season, on Monday, Mulayam Singh announced that son Akhilesh is the party’s presumptive Chief Minister.

The declaration is Mulayam Singh’s newest attempt to end a tug-of-war for power between Akhilesh, the Chief Minister of Uttar Pradesh, and older brother Shivpal Yadav, who is a cabinet minister.

So far, he has leaned towards his brother.

Earlier, in a letter his cousin Ram Gopal Yadav has wrote to him that if Samajwadi Party collects fewer than 100 of Uttar Pradesh’s 403 seats, Mulayam singh alone would be held responsible.

Akhilesh has been championed by Ramgopal Yadav, a long-time duelist with Shivpal Yadav, who is Mulayam Singh’s favourite of four brothers.

Mid-September, Shivpal Yadav was picked by Mulayam Singh to replace the Chief Minister as party president in the state sidelining Akhilesh Yadav.

However, Akhilesh Yadav has been told he will play an important role in selecting who runs for election.